4th Down Magazine’s Game of the Week: Central York vs. Central Dauphin 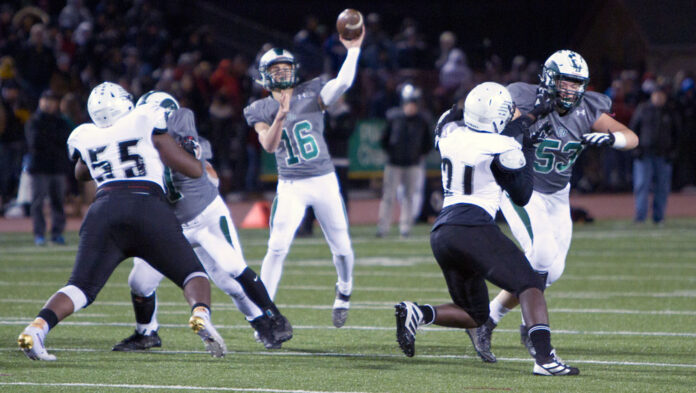 NO. 3 CENTRAL YORK AT NO. 2 CENTRAL DAUPHIN
District 3 Class 6A semifinal

THE PANTHERS (6-0): Gerry Yonchiuk’s perfect Panthers have been the talk of the York-Adams hemisphere even before this strange and revolving football season began. It had something to do with junior QB Beau Pribula, a Penn State commit and one of the nation’s top dual-threat signal callers in the Class of ’22. Pribula, whose brother Cade is a redshirt freshman QB at Delaware, entertained offers from Nebraska, Northwestern, Rutgers, Virginia Tech, Wake Forest and more.

Pirbula has been an excellent pilot through six weeks, completing 73-percent of his 107 pass attempts for 1,170 yards and 24 touchdowns against two interceptions.Seniors Judah Tomb (6 TDs), Taylor Wright Rawls (8 TDs) and Kyle Fontes (5 TDs) are all averaging better than 14.6 yard per catch, with the offense generating 59 points per game. Yes, 59. DT Seth Griffiths and MLB Carter Glassmyer pace a defense that has surrendered just 10 points all season, with all 10 coming coming deep in the fourth quarter with the game in hand. That’s four shutouts in six weeks, about a good as it gets.

THE RAMS (5-0): The only intangible that could have kept the Rams from this position is a fouled season due to the pandemic. Luckily, football is happening, so Central Dauphin’s annual pass to the District 3 postseason is cashed. The Rams, ranked among the top Class 6A programs in the state, will be the most complete football team the Panthers have faced all season. And the other junior QB on display, Max Mosey, possesses the same skill and savvy as Central’s Pribula. Mosey has pitched 12 TDs and averages 5 yard per keeper.

Mosey supported by a stout offensive line – one of the hallmarks of Glen McNamee’s program – and a group of versatile skill players in returning All-State pick Timmy Smith (60 rush, 464 yards, 4 TDs) and fellow senior Shamarr Joppy (24-317-4). Senior Malachi Bowman is a lethal deep threat, whose play in the defensive secondary will factor in Friday. So will the work of LB Paul Clark, CD’s top run stuffer, and the rest of CD’s “all hats” defense. The unit has manufactured 31 TFLs on the season, an important note when pressuring the QB means everything.

THE SERIES: Central Dauphin and Central York have met twice in the District 3 playoffs, with the Rams winning both contests. In 2018, the Rams defeated Central York 49-21 in the quarterfinal round, setting a District 3 6A record with 405 rushing yards.

DOWN AND DISTANCE: Central York, 8-13 overall in District 3 play, has lost five straight in the tournament. The Panthers’ last postseason victory over a Mid-Penn team was a 33-28 win over Chambersburg in the 2012 Class 4A opening round.