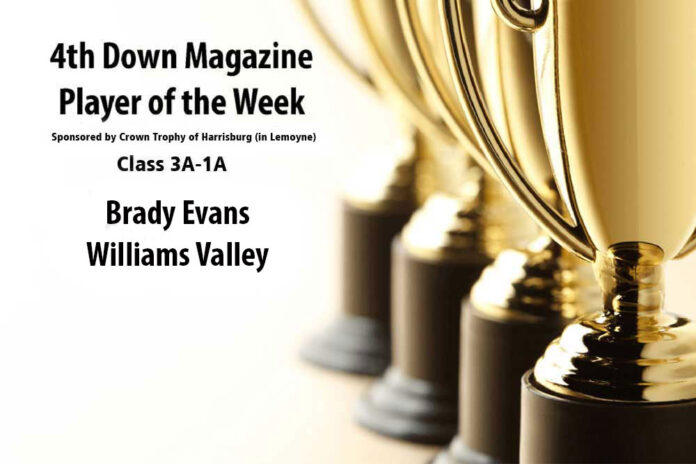 In what may well be a 4th Down voting record, Williams Valley receiver Brady Evans is this week’s Small School Player of the Week.

The junior hauled in big passes Friday and a massive number of votes since Sunday, a whopping 4,354, to run away with the Week 5 honor. That totaled dwarfed the total number of votes cast in the big school poll (3,277) and doubled up the total votes for all of Evans’s competition this week — and that’s including a sizable 1,578-vote performance from Halifax RB/LB Isaac Miller. Evans earned 68% of the 6,370 votes cast this week.

The 6-foot-3 pass catcher certainly earned it. He accounted for all but one point in the Vikings’ 13-6 win over Bloomsburg, scoring touchdowns of 21 and 70 yards from two different passers — QB Isaac Whiteash on the first and RB Alex Achenbach on the second.

Evans finished with eight catches for 149 yards in the tight victory, which got WV back in the win column after a Week 4 loss to improve to 4-1. The Vikings next host 0-3 Panther Valley.

Evans pretty much doubled his season output across the board with the Week 5 breakout. He’s now at 18 receptions, 275 yards and three touchdowns.