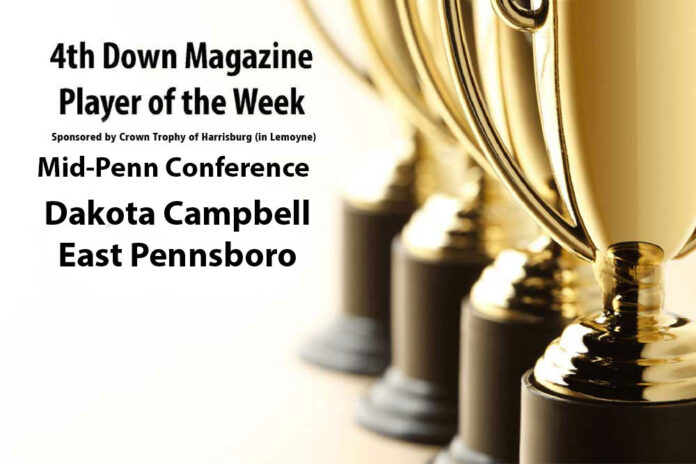 Let’s just highlight how hard East Pennsboro football fans came out this week for the 4th Down Player of the Week poll.

Some 9,501 people voted in full force for a Panther by the name of Dakota Campbell. Incredible turnout.

Campbell was all over Friday’s 27-7 win over Palmyra. He ran for 116 yards and a touchdown on 16 carries, recorded four tackles (1 TFL), a sack, a fumble recovery and a pass defense on defense, and kicked 40- and 27-yard field goals while averaging 29 yards on five punts and 41.2 yards on six kickoffs.

The jack-of-all-trades has 139 rushing yards and a score on 28 carries, is third on the team with eight tackles and second with a sack, is one of four Panthers with an interception and has proven a capable punter with nine boots for an average of 34 yards (and two downed inside the 20-yard line).

Second in this week’s poll with a still insane 8,219 votes was State College senior receiver Donte Nastasi, and third was Lower Dauphin junior RB/LB Ty Millhimes with 2,676 votes. Some 21,857 votes were cast this week.