4th Down Magazine Mid-Penn Player of the Week Sponsored by Crown Trophy of Harrisburg: Keith Oates 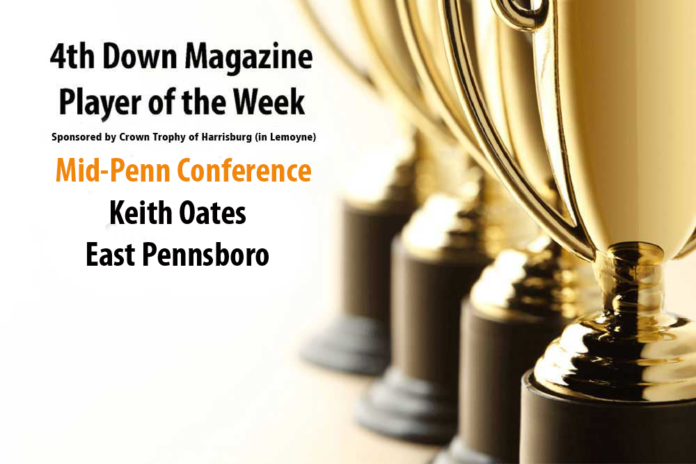 It’s pretty hard to do more than what Keith Oates did in Friday’s 2022 season opener.

The East Pennsboro quarterback, passed, ran and defended his way to a 34-14 win over York Suburban, leaving his handprints (literally) all of the game.

When all was said and done, the junior finished with 119 passing yards and two touchdowns on 4 of 7 passing while running for 81 yards and a TD on 18 carries. And on defense he tallied four tackles and a pass deflection.

That effort caught the eye of a large 4th Down Magazine Player of the Week voting contingent, which hoisted Oates to the top spot this week with 2,771 votes. That beat a valiant effort by the Shippensburg faithful, who gave 2,619 votes to RB/DB Trae Kater.

Finishing third in the poll was Juniata RB/LB Waylon Ehrenzeller (548 votes). There were 6,403 total votes cast.