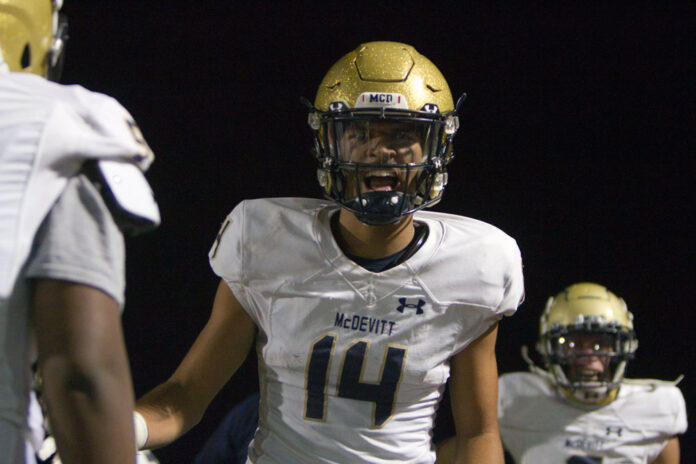 Each week, our crew will dish out ‘Game Balls” to athletes who turned in impressive performances across our coverage area. Here are our selections for Week of Oct. 9-10 of the regular season.

Max Mosey, QB, Central Dauphin: I’ll be honest. I didn’t think the Rams played the most inspired game Friday night, despite beating Carlisle 35-0. They showed little urgency in the first half when they could’ve scored at least 1-2 more touchdowns and buried the Herd by halftime. And Mosey seemed frustrated at times by that as well. They also didn’t take shots deep against a susceptible defense early on. But credit to CD and Mosey for adjusting in the second half and tossing grenades downfield that blew the game open for good. The aggressive offense really boosted Mosey’s final line, with the lefty completing 10-of-14 passes for 147 yards and three TDs that covered 14, 23 and 30 yards. He also ran to the pylon from 5 yards out, finishing with 32 yards rushing. He wants to put a cinder block on the gas pedal at all times. I respect that.

Jaydan Barrick, TE-MLB, Boiling Springs: If you haven’t already, start showing the Bubblers some respect. They’re 3-0 with three very convincing wins. And each week it seems someone new leads them to victory. This week, just for fun, it wasn’t a running back who shined the most. It was Barrick, whose 16-yard pick-6 and 7-yard blocked punt return TD lifted the Bubblers past rival Big Spring 35-21 in the Battle of the Springs. Those consecutive scores came at the perfect time, too. The Bulldogs had scored first and were making things tough. Bubbletown claimed a 14-7 lead early in the second quarter, but Barrick’s two scoring trips locked the game up.

Micah Brubaker, QB, Mechanicsburg: Holy Football Gods. Brubaker looks every bit as good as last year’s breakout version, except better. He’s more accurate, he’s playing more within the offense rather than freelancing the majority of the time and he’s still making plays with his legs. Look no further than Friday’s 48-0 whooping of Greencastle-Antrim. The senior toyed with the Blue Devils, running for an astounding 223 rushing yards, nearly 100 more than his career high a season ago. He ran in three TDs of 8, 60 and 72 yards. And his arm wasn’t really needed, although he again completed more than 60% of his passes (6-of-9, 29 yards), his accuracy among those things that’s improved quite a bit in the last 12 months. Those three incompletions are the most he’s had through three games. Brubaker now has four passing scores and seven with his legs.

Lek Powell, QB, Bishop McDevitt: That was some third quarter performance by the Crusaders’ signal caller in a 40-28 come-from-behind victory over Cedar Cliff (the Colts did lead 28-27 late in the third quarter for 59 seconds). Powell struggled a bit in the first half with some pressure in the pocket that impacted throws, and then his mechanics went haywire in a hurry. He came out in the third quarter throwing darts and never stopped. He was 9-of-12 for 207 yards and four touchdowns in the third quarter, tossing TD passes covering 9, 44, 70 and 23 yards. And two of his three misfires in the quarter were dropped. Overall, Powell finished with 330 yards through the air and five touchdowns. And don’t forget, he did rally the Crusaders after they fell behind.

Davey Loyd, WR, Hershey: Everyone knows the Trojans in 2020 are going to take some shots down the field. And so far they have been connecting on just enough of them to be huge difference makers. What everyone also knows is Davey Loyd is their best receiver. and the passing game plan always involves him as the No. 1 priority. In the Trojans’ first non-last-minute victory of the season against Palmyra, 40-6, the senior had a very big night. Loyd hauled in four catches for 130 yards. That’s a tidy 32.5 yards per catch. That’s stretching the field like this Hershey offense wants and needs. The major impact, though, is taking three of those four catches to the house for touchdowns. That’s changing a game.

Zack Zeiders, QB-DB, East Pennsboro: When the offense piles up 38 points and nearly 350 total yards, good bet your quarterback enjoyed a pretty big night. Zeiders is the Panthers quarterback and earns my game ball this week not so much for his work as the signal caller, but the combination of his contributions on offense and what he did on defense for 2-1 East Pennsboro, winners of two straight after taking out West Perry 38-21. Zeiders led the Panthers in tackles with eight and also came up with two of the three interceptions for East Pennsboro on the night. That’s a solid outing right there. The key is on a night when the Mustangs turned it over four times, East Pennsboro didn’t have one giveaway. Zeiders took care of the football, and East Pennsboro pounded the ball on the ground on its way to victory. He did have a touchdown rushing as well as two picks he snared. I call this a sneaky game ball, because you have to dig a little to see the entire picture of the impact. Well done, Zack.

Kiev Gregg, RB, Harrisburg: Welcome back, Cougars. Kiev Gregg helped Harrisburg race past Berks Catholic 62-28 in the team’s first competition of the season. Behind a strong offensive line, Gregg reached paydirt three times–8,37,and 20-yard scampers–totalling 112 clicks before the night was over. Who is up next to take on this Cougars team? Bueller?…. Bueller?

Trenten Smith, WR-KR, Cedar Cliff: This young man can ball. On a night when the Colts’ offense totaled just over 200 total yards, Smith electrified the crowd with a 92-yard kick-off return for a touchdown–and it came at a critical moment in the game. As the Colts and Crusaders traded haymakers in the third quarter–combining for 47 points–Smith’s return gave Colin Gillen’s team a 28-27 lead late in the quarter.  Not bad for a lad who never strapped on a helmet before this year in a varsity football game.

Jacob Condo, QB-LB, Juniata: Condo’s late-game heroics helped the Indians hold off Lower Dauphin 21-14 in overtime in a Mid-Penn crossover. While Condo found Yaneil Ortiz with a short touchdown pass to force the extra session, his short TD run in OT generated the game-winning points. Condo finished 16 of 25 passing for 143 yards and 1 touchdown.

Brayden Boyer, WR-DE-PK, Line Mountain: Registering a pick-six on a well-diagnosed screen pass, Boyer’s 12-yard interception return had Brandon Carson’s Eagles  in complete command midway through the second quarter. While Boyer added a number of stops to his defensive performance, he also provided oomph to the Line Mountain kicking game by converting all six of his placement attempts and blasting a pair of field goals.

Austin Kenny, RB-LB, Susquenita: Kenny accounted for nearly one-third of the Blackhawks’ 500-plus offensive yards, but it wasn’t enough to produce a positive result as Scott Acri’s club lost 48-31 at Upper Dauphin. Kenny wound up rushing for 171 yards on 19 carries — Susquenita piled up 519 offensive yards — and one score.

Bryce McKee, WR, Susquenita: Here’s another Blackhawks performer that uncorked a productive effort in a 48-31 loss at Upper Dauphin. Just a freshman, McKee hauled in seven passes for 152 yards and one touchdown for Scott Acri’s bunch. Susquenita totaled more than 500 yards of offense in the Mid-Penn Liberty Division loss.

Kyle Casner, DB-WR, Upper Dauphin: Casner pitched in plenty as the host Trojans broke into the victory column with a 48-31 victory over Susquenita. Defensively, the 6-1 senior swiped a pair of passes and paced Kent Smeltz’s club with seven tackles. Offensively, Casner collected one pass for 13 yards and pocketed one two-point conversion.