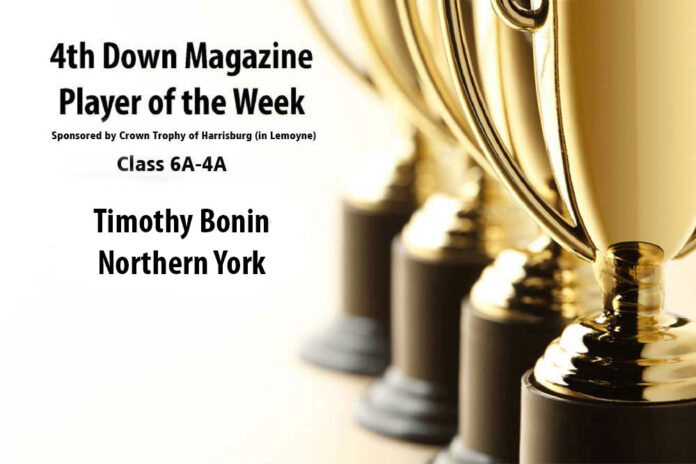 Timothy Bonin finally had his breakout game five contests into his first full year as the starter.

The junior Northern quarterback is this week’s 4th Down Magazine Big School Player of the Week following a career performance that led the 4-1 Polar Bears to a quality 31-14 win over West Perry.

Bonin had career best numbers in multiple areas, throwing for a new high of 201 yards (nearly double his 111 from Week 1) and three touchdowns. His 55-yard long pass his a career best, and his 64.3% completion percentage (9 of 14) was second best, while his completions tied a career high.

One of his top targets, Mason Yohn, deserves a hat tip as well for catching touchdowns of 34 and 55 yards. Yohn now has five touchdown grabs on six receptions, an incredible conversion rate.

For the season, Bonin is 39 of 67 for 589 yards and eight touchdowns against a single interception. He’s also ran for 105 yards and two TDs on 42 totes.

Bonin snagged 781 of 1,965 votes this week (40%). In second was Mifflin County junior receiver/defensive back Isaac Wilson with 555 votes.

The Polar Bears have arguably their most important game of the regular season this week with Shippensburg.