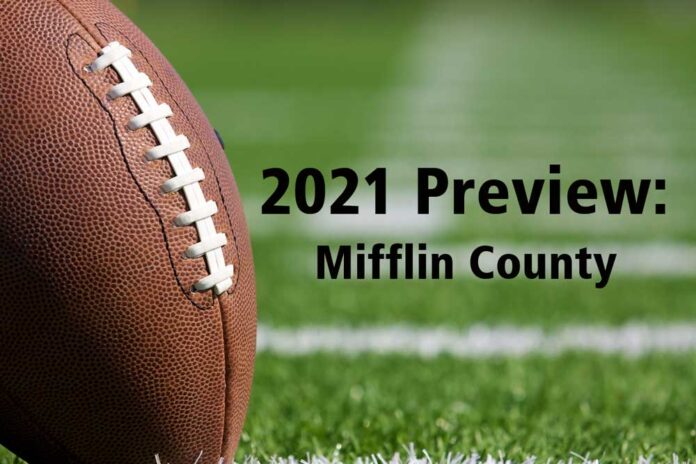 OUTLOOK: The move from the Colonial Division to the Keystone resulted in a few more bumps than expected as Sechler and his crew posted a winless campaign during the COVID-truncated season. Mifflin’s second turn in the division should be a different story as the Huskies emphasize a power-running attack behind an offensive line that includes Jaxson Pupo (5-foot-11, 225), Alexander Price (6-2), Ryan Stahl (6-0, 205) and Elijah Osborne (6-0, 260). A .500 record isn’t out of the question if the Huskies young guns turn out to be quick studies.

Mifflin County won’t be trying anything cute when the team kicks off its regular season Friday against State College — and that’s by design. The Huskies are determined to return to their power football roots — a battle plan that was last used back in 2018 when Scott ’s crew bruised and batters its way to the Colonial Division title. With a big number of big-eaters now on the roster — a group so large it sent Sechler’s scrambling for extra-large helmets and shoulder pads this offseason — the brawn no longer is scarce in Lewistown. “We’re going to go back to what we did a few years ago when we won the Colonial,” Sechler said. “So, we are going more power football. We have big guns up front, and we are just going to run the ball downhill and dare teams to stop it.”

You can include Jared Lyons, the odds-on favorite to start at quarterback, as one of the brutes who will bring a physical presence to the Huskies attack. The 5-9, 195-pound senior threw for 402 yards as a junior; and while Lyons won’t be afraid to sling the pigskin, his build should play up in the ground-focused Mifflin scheme. “He’s a gunslinger,” Sechler said. “He isn’t afraid to throw the football. We’ve been working throughout the season to get him to get the ball out of his hand sooner. Trying to see things a little quicker. … He’s a little bit of a risk taker. I think we need that. And he’s physical, he’s not afraid to run you over. When he takes off, he runs like (Tennessee Titans running back) Derrick Henry. He just puts his arm out and stiff arms you and knocks you down. He’s had a really good offseason.”

Strong corner play in the Keystone Division is a must when you’re lining up against top cats from Bishop McDevitt, Cedar Cliff, Milton Hershey and more each year. You can check that box off for the Huskies, who possess a pair of playmakers in coverage. Josiah Sechler, son of Scott, debuted last year posting a pair of picks and five tackles in six games. He more than held his own as a sophomore, and bigger things are expected for the incoming junior who shot up 2 inches and packed on 20 pounds to his frame. “He’s probably the fastest kid on the team. … He can help us stretch the field for us,” Scott Sechler said of his son, who will play both ways. “Defensively. He’s a ball hawk. He’s good in man coverage and not afraid to press.” Danny King, a physical corner who can also play at outside linebacker, is expected to start opposite Sechler in coverage.