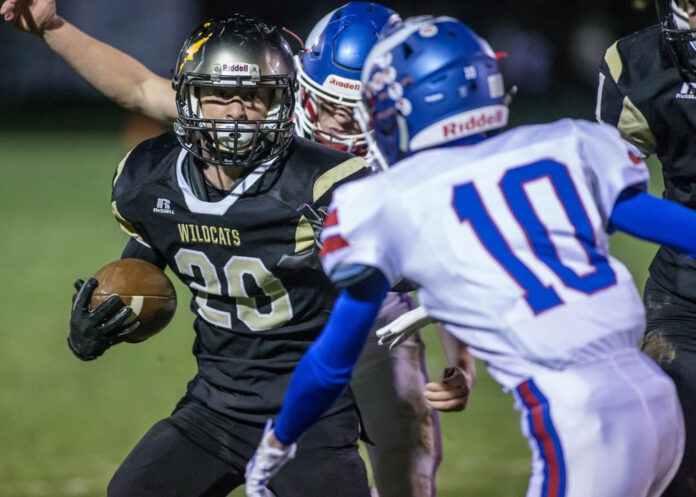 Outlook:Going from one end of the proverbial high school football spectrum to the other in a mere 12 months meant the Wildcats went from celebrating several championships to dealing with a winless campaign. Well, here comes the hard part and that’s embarking on the grind necessary to return to prominence — and grind is the operative word here as the rebuilding project begins in earnest. Skipper Earl Mosley likes this group and he has some capable players, but keeping everyone upright is a must if the Wildcats hope to compete — and relocate that winning feeling.

1. ‘Cats counting on Enders to make a season-long impact … again: About to embark on his junior season — that’s right, he’s merely a junior — 5-foot-9, 185-pound Bryce Enders appears poised and ready to accomplish plenty before the 2020 campaign comes to a close. Halifax’s leading returning rusher and a player who last season wound up third on the Wildcats’ receiving list, Enders also is the top tackler still in the fold. Not too shabby for a youngster that last season landed all-conference honors on both sides of the football. The son of former Halifax skipper Ritchie Enders, the younger Enders also was a defensive regular in 2018, when the ‘Cats captured a District 3 Class 1A crown and collared their first win at the state level. Despite his level of productivity, third-year head coach Earl Mosley believes Enders’ intangible contributions are just as critical to what his latest club is capable of achieving. “Bryce is a consummate leader, and I really mean that,” Mosley said. “He keeps us in line, he keeps everything going, he keeps people encouraged. He’s phenomenal, and it would be great to have 10 others like him. Not that we don’t have other leaders, but he’s a constant leader. … He’s a worker. Sometimes we’ve got to tell him to slow it down and save something for the games.”

2. Improved Deitrich’s return means ‘Cats have more possibilities at QB: Starting for the first time a season ago, senior Micah Deitrich threw for nearly 1,700 yards. He has his top three receivers — Ryan Stahl, Judah Miller and Bryce Enders — returning on the flanks and in the backfield. Naturally, Deitrich’s growth at the position should result in some tweaks to the Wildcats’ attack and some more pre-snap freedom since the 6-1 senior’s ability to recognize what opposing defenses have in mind also has expanded significantly. What also could help is if Halifax can add some muscle to its running game, a dimension that would allow Mosley’s Wildcats to be less predictable and potentially more lethal. “We’re doing a few things differently that take advantage of his skills. Perhaps we’re not going to be five-stepping as much and dropping back, but maybe we’re looking to move the pocket with him and making quick passes,” Mosley said. “He has a full grasp of the offense, having been in it for four years. Like I said, we have cut some things down yet we want to give him more opportunity to make audibles at the line of scrimmage because he does understand defenses better. That’s a big plus when I call something and he sees something that’s better and he’ll call it. He’s doing a really good job in practice because he’s also a great leader.”

3. Lack of numbers spells concern with a capital C: While erasing the sting remaining from last season’s 0-10 finish definitely is a major priority for Mosley’s driven Wildcats, a remarkably small roster doesn’t allow for much flexibility. Although several would-be regulars opted out for a variety of reasons, COVID-19’s presence has played a role since kicking specialist Tai Lehman opted to compete only for Halifax’s soccer team since a positive test within either side could put both programs on pause. So even though Mosley and his staff believe the Wildcats have improved, a single injury to one of the regulars could cause all sorts of chaos. “It would be like a domino effect. Let’s say a key starter like Bryce goes down [and that would be huge], because he’s such a key at so many positions. So, it’s imperative that we stay healthy,” Mosley said. “There’s days when we pull them back because we need to make sure we have fresh legs for game day. … It’s simply staying healthy. I think the kids have grasped the defense and the offense that we’re running, and they’re playing fast, which is pretty good. We have some young kids out there and they’re learning on the go, but [minimizing injuries is] the most important thing for us right now.”