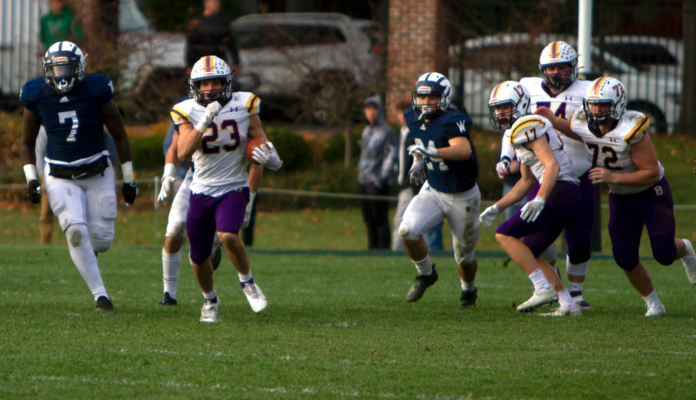 For the second year in a row Wyomissing had no trouble overpowering Boiling Springs in the District 3 Class 3A playoffs. The Spartans scored at will and dominated the line of scrimmage on both sides of the ball to cruise past the Bubblers 55-14 in the Class 3A title game at Varsity A Field in Berks County. The victory clinched the third consecutive district championship for Wyomissing.

You have to start up front. Midway through the second quarter Wyomissing led 14-7 and it was still a game on the scoreboard. But it was clear the Spartans were on their game and that means the offensive line is creating creases inside and evaporating the edge on runs outside the tackles. The Bubblers were scratching and clawing to hold on, but it was clear by the second quarter the Wyomissing offense wasn’t going to be slowed down by the Boiling Springs defense. The Spartans finished with a staggering 430 rushing yards.

Midway through the second quarter Wyomissing was ahead 14-7 and the Bubblers defense came up with a stop to force a punt and Boiling Springs took over at its own 37. Running back Jack Laing found a crease around right end and rumbled for only the second first down for the Bubblers. At the tail end of the run Wyomissing DE/OLB Amory Thompson punched the ball loose from behind Laing and the Spartans recovered. Wyomissing proceeded to go on a tear from that point, scoring two more touchdowns before halftime to start a run of six straight possessions for the Spartans that ended with a touchdown.

Boiling Springs senior RB Joey Menke had a game-high 184 yards on 15 carries with a pair of long touchdown runs covering 55 and 82 yards. … Boiling Springs did not complete a pass and finished with only 234 yards of total offense. … Wyomissing amassed 430 rushing yards on 53 carries, a very efficient 8.1 yards per carry for the Wing-T offense of the Spartans. … Thomas Grabowski paced the Spartans’ versatile and efficient run game with 178 yards on 19 carries with three touchdowns. … Wyomissing QB Ben Zechman threw an interception on his first attempt then completed four of his final passes for 90 yards with a pair of touchdowns. … The Wyomissing defense had two sacks and two tackles for loss in the first half. … Boiling Springs ran only 16 plays the first half, had two first downs, 82 total yards – 55 of those on Menke’s first TD run – and trailed 28-7 at intermission. … The Spartans scored the final six times they had the ball.

This Wyomissing defense is as advertised. They are fast, aggressive and physical at the point of attack. The speed of that defense had the Bubblers on tilt all game. Menke’s two touchdown runs accounted for 137 yards. The other 41 plays the Bubblers ran offensively added up to just 96 yards.

Even when it was 14-7 in the second quarter it was clear Wyomissing was overall the better team. The fumble and a block punt by the Spartans on the next possession only accelerated the difference on the scoreboard so it matched the difference between the two teams that was playing out on the field. For all the points Wyomissing scored, the strength of this team is not its offense. The Spartans’ defense is a beast.

“I didn’t think we were ready for how fast they were going to snap the ball on offense. We were messing around in the back, trying to get our calls right and I think that cost us.” — Boiling Springs RB Joey Menke

“We just couldn’t get it done. I feel bad for our seniors. They really turned this program around and we came up short. This sucks. We ran into a good team today and they outplayed us. The fumble … we were just finding some things that were working, we break one and then we put the ball on the ground. They just played downhill from there.” – Boiling Springs head coach Brad Zell