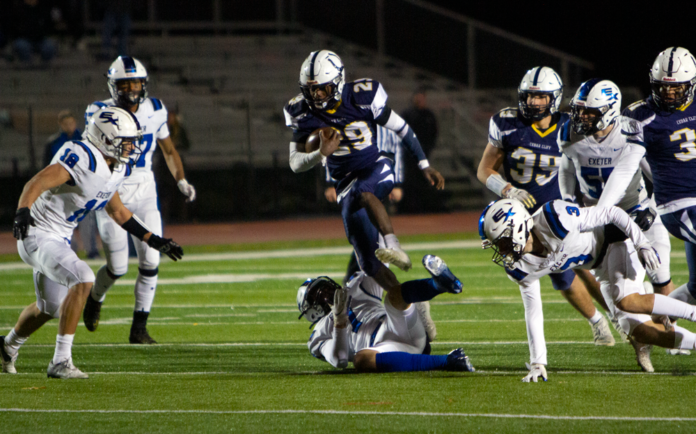 At first glance the final score from Rocco Ortenzio Stadium might lead one to believe Bishop McDevitt struggled a wee bit with Berks Catholic in the District 3 Class 4A semifinal.

This Crusaders offense has hung so many 50-point burgers laced with big play after big play for the better part of two straight months, seeing only 35 out McDevitt might raise an alarm or two.

Fear not, this was a very efficient and tidy effort by McDevitt. The Saints played their corners so far off receivers that getting beat down the field with deep throw after deep throw wasn’t going to happen. They were giving the Crusaders the intermediate routes.

Did head coach Jeff Weachter take some shots down the field? Of course he did. He always will. They didn’t hit, so on this chilly Friday night his offense took exactly what Berks Catholic was willing to concede.

McDevitt still had 453 yards of total offense on 60 plays. Every offense will take 7.6 yards per play. Every marquee weapon showed up and contributed, too.

Even when J.J. Jordan found wide-open space around the left end midway through the second quarter for a 29-yard touchdown scamper to cut McDevitt’s lead in half, 14-7, the outcome was never in doubt.

Freshman QB Stone Saunders missed a couple easy passes, but he also made two eye-popping throws to Mario Easterly for touchdowns. Each was the kind of throw you don’t see very often from a high school quarterback, let alone a freshman. Saunders finished with 304 yards and four touchdowns.

Easterly and Kamil Foster each had eight catches, went over 100 receiving yards and combined for three touchdowns. Running back Marquese Williams picked up 103 yards on 16 carries with a touchdown.

McDevitt punted once and had only three penalties. This was a respectable blueprint for the Crusaders offense moving forward.

Of course, we will not forget or overlook the defense. If you speak of the one-loss Crusaders and focus mostly on the offense, you have made a grave mistake. This defense could be the meal ticket in the coming weeks if this squad is going to make a deep run.

Berks Catholic was the first Wing-T offense McDevitt has seen all season. There’s some nuance and finesse needed to play defense against the favorite run-based offense of old-school coaches. And the Saints are better at running it efficiently than most.

Other than a few odd runs, McDevitt’s defense locked down the Saints and contributed big-time to making sure this result was never in doubt. Berks Catholic managed only 126 total yards, all of them on the ground, on 40 total plays. That’s a paltry 3.2 yards per play. You will win 99 out of 100 games surrendering 3.2 yard per play.

Berks Catholic managed only six first downs and punted eight times. Can we talk about this defense some more, please?

More than anything, getting my first in-person eyes on this defense, what grabbed my attention was the tackling. It was crisp, clean and there were not too many tackles missed. And they have some speed. It’s subtle, but if you watch close enough you’ll see it. They get to the football in a hurry.

Lampeter-Strasburg will get its crack at the Crusaders in the Class 4A championship game where McDevitt will look to claim District 3 title No. 15.

Cedar Cliff saw its 10-win season come to an end at West Shore Stadium, falling to No. 7-seed Exeter Township 42-35 in a District 3 Class 5A semifinal shootout. Each offense was in full-out assault mode the second half with three touchdowns apiece.

This was not an upset, either. Cedar Cliff was the No. 6 seed and a clear-cut underdog to the Eagles.

Cedar Cliff had no answer defensively for Exeter stud running back Eric Nangle. The senior scored all six touchdowns for the Eagles — five rushing and one receiving.

I give the Colts full props on this one. They spent almost the entire second half chasing the Eagles from behind and never stopped firing back every time Exeter would grab a two-score lead. It was clear Cedar Cliff’s defense was not going to stop Nangle and the Eagles’ offense to create an opportunity to win the game. But the Colts’ offense kept slugging away and never allowed Exeter to feel comfortable.

Colts standout running back Jontae Morris got his two yards to clear 2,000 for the season for an offense that was balanced and effective all night. Cedar Cliff scored 35 points and still chased the game.

Williams Valley saw its season come to close in the first round of the PIAA Class 1A playoffs against undefeated Old Forge 26-7, and the Blue Devils’ defense showed why they are the No. 1 ranked team in the state.

Despite creating three turnovers, the Vikings managed only a single touchdown late in the first quarter to square the contest 7-7. Old Forge only led by six at intermission before its defense completely took over and limited Williams Valley to only 66 yards the second half.

Only twice did the Vikings manage to nudge into Old Forge territory on its final six drives of the game. The Blue Devils’ defense has allowed only 73 points in 13 games for a reason.

Williams Valley was in this game for a long time. The Vikings’ defense did its part by holding Old Forge to 13 points until two late touchdowns iced it.