Schuylkill League News and Notes: Tough stretch on tap for Tri-Valley; Pine Grove looking to capitalize on an opportunity to break its losing streak and more 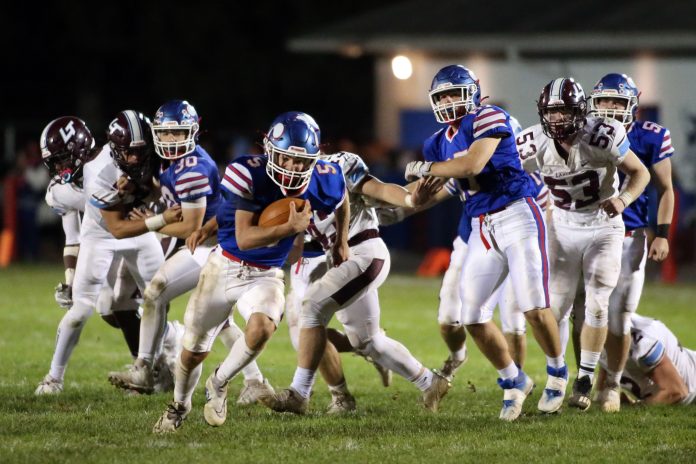 As they continue their preparations for a Week 8 encounter against yet another Colonial-Schuylkill Blue Division playmate, one significant piece of video Jeff Sampson and his Tri-Valley coaching staff undoubtedly examined had to be last weekend’s scrap between Mahanoy Area and Williams Valley.

Not only because the state-ranked Bulldogs (7-0, 2-0 C-S Blue) are entertaining Mahanoy (4-3, 1-1) this weekend — and the Golden Bears led for a good bit of last weekend’s matchup — but also because fourth-ranked Tri-Valley and Williams Valley will wage their annual neighborhood battle in Week 10.

Tri-Valley, meanwhile, didn’t have much trouble maintaining its perfect mark as the Bulldogs bested Nativity 43-6 behind another productive outing from Kameron Wetzel. Playing in just his second game since returning from a leg injury, Wetzel rolled up 171 rushing yards and two touchdowns on just 17 carries.

Sampson’s Bulldogs, who sit atop the District 11 Class 1A power rankings, led 29-6 at the halftime break.

Although Nativity cashed in just before halftime, Wetzel’s 20-yard touchdown run and Reece Huntzinger’s 8-yard TD sweep closed out yet another win as Sampson’s Bulldogs rolled up more than 300 yards on the ground. Miller wound up completing five of his 12 attempts for 134 yards and two scores. He was picked off once.

Porter finished with a team-high eight tackles. Porter, Cole Gemberling and Wyatt Allgeier were credited with sacks. Tri-Valley yielded 192 offensive yards, but only 39 of those came on the ground.

Mahanoy jumped out to a 13-0 advantage in the opening quarter — Colm McGroarty scored on runs of 85 and 55 yards to give the hosts their early cushion — yet despite conceding the lead in the third quarter the Golden Bears were up 21-14 at one point in the final stanza. Mahanoy retook the lead early in the final quarter on McGroarty’s 54-yard TD burst. McGroarty finished the night with 23 carries for 246 yards and all three Mahanoy TDs.

Williams Valley answered on its next possession, capping a run-happy march with an Isaac Whiteash 1-yard QB sneak and then took the lead for good when Alex Achenbach ran it in for the two-point conversion. Mahanoy was able to rack up 371 offensive yards, 335 on the ground, yet surrendered 328 to the Vikings.

Williams Valley (5-2, 2-0) finally subdued the host Golden Bears when Whiteash scored on a 1-yard run with a mere 7:41 showing on the scoreboard and Achenbach provided the game-winning points on a two-point conversion.

Achenbach, who earlier in the game rushed for touchdowns covering 2 and 80 yards, ran 26 times for 219 yards as the Vikings chalked up their second consecutive victory. Now, Tim Savage’s squad will entertain a gritty Marian Catholic squad (4-3, 2-1) that’s trying to squeeze into the District 11 Class 1A playoffs.

Heading into this weekend, the Colts sit fifth. Only the top four advance to postseason play.

Whiteash finished with 99 yards on 6-for-12 passing, with four of his throws hauled in by favorite target Brady Evans (four receptions, 62 yards). Six Vikings amassed 10 tackles or more, with Logan Williard piling up 16. Cruz Banda, Aiden Miller and Brayden Crisswell each adding 11 stops, and Brady Shomper and Bryant Hoover had 10.

Marian (4-3, 2-1) powered its way past Shenandoah Valley 36-0 as Jayden Fermin wheeled 13 times for 98 yards and Matt Martin churned out 89 yards and two scores on nine attempts. Stan Dakosty’s Colts, who were up 29-0 at the break, averaged 8-plus yards per carry while totaling 325 lengths on 40 totes.

Martin ran for scores of 12 and 9 yards — and tacked on a two-point conversion — both in the opening half. Michael Silliman added a 33-yard scoring run, while quarterback Bruce Hopeck cashed in from 2 yards out.

Martin added 11 stops for the Colts, one fewer than Joey Walko and two fewer than James Rodino.

Maybe this will be the week when Dave Shiffer’s Pine Grove program (1-6, 0-5 Red Division) finally tastes victory … again. If so, the Cardinals need to go all the way to suburban Allentown to snare an elusive positive result.

Awaiting Pine Grove when Shiffer & Co. arrive in the Lehigh Valley will be winless Salisbury (0-7, 0-5), just the latest squad to get leveled by Palmerton. Salisbury suffered a 51-6 setback, falling behind 48-0 at the break.

Limited to 105 offensive yards — the Falcons did not gain a single yard in the passing game — running back Nicholas Beck netted 73 and one touchdown on just eight attempts. Salisbury also turned the ball over twice on fumbles. Jacob Gibbons paced Salisbury’s defense with eight tackles, one more than George Spann.

Share
Facebook
Twitter
ReddIt
Email
Previous articleLiberty Division News and Notes: Battle set to stake sole possession of first place in the division; Susquenita in need of wins to earn postseason berth; Eagles aim to streak and more
Next articleResults: Picks and Predictions for Week No. 8