Liberty Division News and Notes: Battle set to stake sole possession of first place in the division; Susquenita in need of wins to earn postseason berth; Eagles aim to streak and more 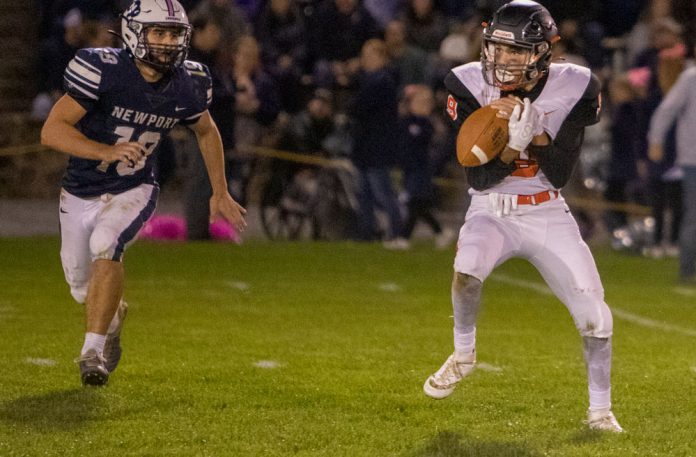 Well, it’s about to get really, really interesting for those following the Mid-Penn Liberty Division — and whether or not one favors a particular program fervently or just enjoys high school football.

One thing we definitely know is only one team will be sitting atop the Liberty Division standings without a loss — either reigning champion Juniata (5-2, 3-0) or an Upper Dauphin squad (5-2, 4-0) that last season finished second and will host this season’s matchup of league unbeatens.

Both come into this weekend’s scrap in Elizabethville sporting four-game winning streaks. And while Juniata has surrendered a mere seven points during its recent spurt — Boiling Springs ended the Indians’ string of three consecutive shutouts — Upper Dauphin has been flashing its combustible attack.

While Juniata stepped out of league play last weekend and turned back Boiling Springs 13-7, Kurt Condo’s squad was trailing by a 7-0 count when the fourth quarter began. However, a 1-yard sneak by quarterback Aaron Kanagy and Seth Laub’s 3-yard blast with 3:12 left had the Indians up 13-7.

The phase that bailed Juniata out was a defensive unit that forced six turnovers (three interceptions, three fumbles) and No. 6 was taken away at the Bubblers 29 with 2:53 to go. All four Boiling Springs drives in the fourth quarter ended with turnovers.

And Juniata, which played much of the game without leading rusher and leading tackler Waylon Ehrenzeller, took advantage of those short fields. A good thing, too, since the Indians totaled just 159 offensive yards. Laub led Juniata with 33 rushing yards on 11 attempts, while Kanagy was 9 of 22 passing for 75 yards while running for 19 more.

UDA, which is trying to hang on to the sixth and final invite to the District 3 Class 3A playoffs, is averaging just north of 41 points per game. Contrast that with Juniata, District 6’s top-ranked Class 4A outfit, which is yielding just south of eight points per contest.

Buoyed by an offensive unit that scored on six of its seven possessions while piling up 355 yards, Line Mountain (3-4, 2-1) pocketed its second straight victory with a 43-13 triumph at Halifax.

Ian Bates continued his dazzling play by rushing for 154 yards while scoring touchdowns covering 1, 34 and 8 yards — he netted 120 yards on 14 tries in the opening half as Brandon Carson’s Eagles opened a 27-0 lead. Bates also caught two passes for 34 yards.

Freshman quarterback Kaiden Maurer, making his second varsity start, completed 12 of his 16 pass attempts for 154 yards and one score. Maurer’s lone TD pass came on a 16-yard throw to classmate Max Johnson on fourth-and-long. The Eagles converted nine times on third and fourth down.

Quinn Dunkelberger provided a nice changeup in the running game, collecting 45 yards on 13 carries and scoring from a yard out with 7:11 to play. Junior Chandon Maurer was his younger brother’s favorite target, hauling in four passes for 59 yards. The older Maurer scored on a 5-yard run.

Rebounding nicely from its 10-7 loss at non-league playmate Camp Hill, Susquenita overwhelmed Newport 52-14 behind a balanced offensive unit that piled up 430 yards — including 275 through the air as starting QB Derek Gibney was 14 of 27 for 239 yards and four touchdowns.

Two of Gibney’s touchdown throws went to Athan Robinson (3-32), who pocketed first-half TD receptions covering 9 and 7 yards as Augie Glass’s Blackhawks (3-4, 2-1) opened a 23-7 halftime lead on their northern neighbors. Louie Frisenda added a 1-yard touchdown run and Hunter Thomas booted a 29-yard field goal on the final play of the opening half.

Gibney added TD passes covering 20 and 28 yards to Kamar Lewis and twin brother Drew Gibney in the final quarter. Drew Gibney caught six balls for 92 yards for the Blackhawks, who sit eighth in the District 3 Class 3A field and need to get to sixth to qualify for postseason play.

Susquenita’s defense allowed just 163 offensive yards, with 155 of those coming on the ground.

Carroll was 5 of 9 passing for 60 yards and one score, but he was picked off once. Peter Ranck grabbed three passes for 31 yards, while Line Mountain limited the Halifax ground game to 49 yards on 18 tries.

Just when Newport (0-7) appeared poised to break through with a needed victory, the Buffaloes suffered a 52-14 setback at home to Susquenita. If that wasn’t disheartening, imagine how Todd Rothermel’s squad must feel since Steel-High (5-1) is en route to Newport.

That’s state-ranked Steel-High, the No. 1 team in the District 3 Class 1A power rankings.

Newport struggled to get its offense going against Susquenita, amassing 163 total yards, with all but 8 gathered by the ground game. Just one week after rushing for 209 yards and three scores at Line Mountain, Aiden Dishman paced the Buffs with 58 yards on 13 attempts.

Mason Messick (12-39) and Dalton Kratzer (6-46) shared 85 yards and two touchdowns for Newport. Messick scored from the 2 in the second quarter — the Buffs trailed 23-7 at the half — while Kratzer motored 40 yards for his score late in the third quarter.

Messick totaled just 8 yards passing (3 of 8, one INT). Zach Bellis made nine stops defensively, but the Buffs were bumped up for 430 offensive yards by the balanced Blackhawks.

Since Steel-High received a forfeit victory over Middletown last weekend — the Blue Raiders’ season was scrapped due to a significant hazing incident — Andrew Erby Sr.’s Rollers have had two weeks to prepare for Rothermel’s Buffs. At the top of defensive coordinator George Miskinis’ to-do list is trying to find a way to keep quarterback Alex Erby from sitting in the pocket having all kinds of time to find a receiver.

When the Rollers last played, they collared Camp Hill by a 71-20 score, a victory that capped a three-game run during which Steel-High rolled up an impressive 206 points. Alex Erby threw four touchdown passes and scampered for a fifth score against Steel-High, while Bamm Appleby swiped three passes.

Share
Facebook
Twitter
ReddIt
Email
Previous article4th Down Magazine Week 7 Mid-Penn Player of the Week Sponsored by Crown Trophy of Harrisburg
Next articleSchuylkill League News and Notes: Tough stretch on tap for Tri-Valley; Pine Grove looking to capitalize on an opportunity to break its losing streak and more

Vote now: 4th Down Magazine Week 13 Player of the Week Sponsored by Crown Trophy of Harrisburg