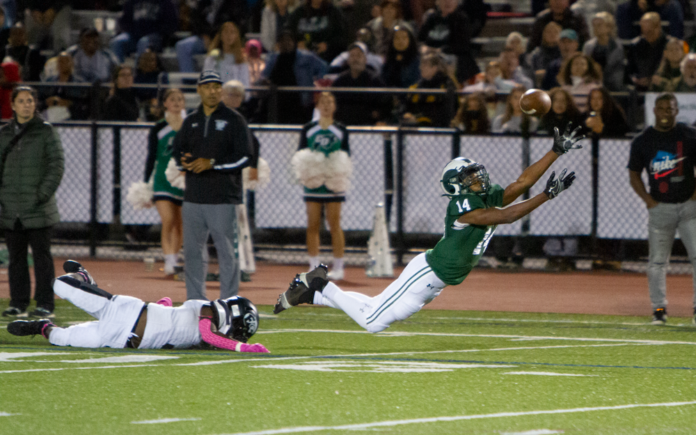 Offensive balance and depth, along with some stingy run defense, allowed CD East to overwhelm Central Dauphin over the course of 48 minutes Friday night.

Panthers running back Marcel McDaniels had a big night on the ground to power East to a convincing 31-14 victory at The Speedway.

McDaniels flashed inside and outside on his way to 178 yards on 30 carries with a pair of touchdowns. CD East mixed and matched at the quarterback position with Terrance Jackson-Copney (who started) and Tony Powell each garnering equal snaps. The duo combined for 201 yards through the air with each QB notching a touchdown pass.

CD East led 14-0 at halftime, but Central Dauphin had the ball first to start the second half. After surrendering a 37-yard pass, the Panthers defense went into lockdown mode and turned the ball back over to its offense by getting a stop on downs at its own 20. Eight snaps later, all running plays, the Panthers had a comfortable 21-0 lead when McDaniels finished off the 80-yard march with a 2-yard touchdown run. Daniels carried the rock six of the eight plays and accounted for 71 of the 80 yards.

Copney-Jackson did a little bit of everything offensively for CD East. He rushed for 46 yards on eight carries, threw for 102 yards including an 11-yard touchdown pass and had a key 37-yard reception on a Panthers scoring drive right before the half. …. Penn State 2022 recruit Mehki Flowers played a huge role in the short passing game, hauling in nine receptions for 84 yards and a touchdown. … The two teams combined for only four total punts. … CD East won despite 9-94 in penalties. … CD quarterback Max Mosey was very good, throwing for 158 yards despite serious pressure with a touchdown. He also added a 6-yard touchdown run. … The Rams averaged only 3.1 yards per carry. … Panthers LB Thaddeus Krebs had two of his team’s three sacks.

The Rams closed the gap to 10 points (24-14) early in the fourth quarter, but the only place the game felt that close was on the scoreboard. CD East did what it wanted on offense all game, and only some dodgy play calling on a couple drives slowed the Panthers down. In a rivalry dominated by Central Dauphin, it was unusual to watch a game where the Rams had little or no say in the outcome.

Up front on both sides of the ball was where this game was won for CD East. The Panthers’ offensive line was calling the shots and running the show, and the defensive line was stout against the run and created plenty of pressure in the passing game.

“We had our ups and downs at times, but played well overall defensively even though we gave up a couple long shots. We wanted to get after the quarterback, blitz a lot and make him throw the ball. It was a great win.” — CD East linebacker Thaddeus Krebs

“It felt really good out there tonight. My offensive line, I think, is the best in the Mid-Penn Conference. They’ve been working so hard. I’ve been working hard in practice on getting to the second level and making a move. It helped and paid off tonight. A big part of our offense tonight was the passing game. The quarterbacks did a good job.” – CD East running back Marcel McDaniels