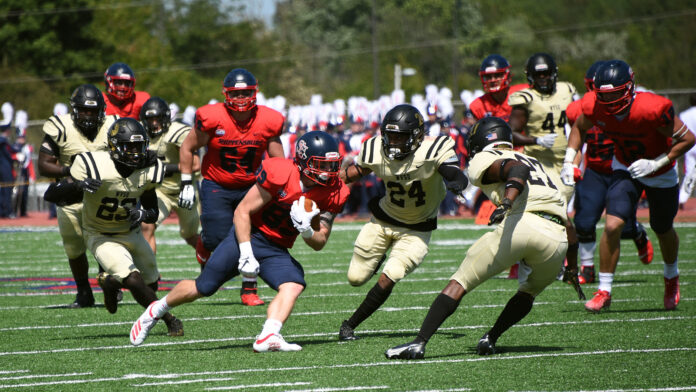 In this section, we’ll feature one former Mid-Penn player who had a particularly impressive week in college football.

Cody Gustafson has been nothing short of spectacular since joining Grove City’s football team.

The former Shippensburg High School pass catcher has put up one big season after another since his debut in 2017 with the Wolverines.

Gustafson put together his third 100-yard receiving performance Saturday in a 33-32 loss to Westminster, going for 13 catches, 132 yards and two touchdowns. It was the Wolverines first loss of the season after a 3-0 start. His 132 stripes are actually the second fewest he’s had this season — he had 159 yards, 157 and 52 in his previous three games.

In total, Gustafson has played 40 games in five seasons — like many across college football, Gustafson has taken a fifth year granted by the NCAA because of COVID-19’s impact on college sports — with 281 receptions, 4,408 yards and 43 scores.

Considering the publication time this week, it’s worth mentioning CD East product Chase Edmonds had himself a 75-yard day in Arizona’s 31-19 win over Jacksonville on Sunday. Edmonds ran 11 times for 26 yards and caught seven passes for 49 yards.

In this section, we look at some of the former Mid-Penn standouts that had big weeks a little closer to home.

Perhaps the best performance belonged to Quentin Gaskill, a Bloom defensive back from Waynesboro who had 11 tackles and a fumble recovery in the loss. Although Central Dauphin grad Trey Paul (DB) showed well on defense for the Red Raiders with four tackles, a pick and two pass breakups.

Receiver Evan Morrill (Lower Dauphin) tied for the most receptions for SU with five and had the third-most yards with 63.

In this section, we’ll list off some of the performances from former Mid-Penn players now in the college ranks

Cedar Cliff grad Grant Breneman escaped his early season slump with 169 passing yards (14 of 24) and 119 rushing yards (16 carries) in guiding Colgate to its first win of the season, 30-3 over Lehigh. The QB had a pair of touchdowns as well, one on the ground and one through the air.

In Penn State’s 38-17 win over Villanova, Waynesboro grad Forrest Rhyne stood out with 11 tackles, 2.5 TFLs and 1.5 sacks in the Wildcats’ loss, their first of the season. The Nittany Lions got three tackles from Cumberland Valley alumnus Charlie Katshir, two from State College’s Keaton Ellis (and a pass breakup) and another tackle from Susquehanna Township’s Fatorma Mulbah.

One-time Penn State tight end and former Camp Hill standout Zack Kuntz put up a six-catch, 45-yard, one-touchdown performance in Old Dominion’s 35-34 loss to Buffalo. One of his teammates, Bishop McDevitt playmaker Joe Joe Headen, had a tackle and pass breakup from his cornerback spot. The Monarchs stormed back from a 28-7 third-quarter deficit and got within one on Kuntz’s touchdown grab with 19 seconds remaining, but the extra point was missed.

Back in PSAC action, IUP got six extra points (on seven attempts) from kicker Tyler Luther (Chambersburg), and Central Dauphin product Grant Smith caught two passes for 19 yards and a score from his tight end position in a 48-13 win over Mercyhurst.

Two former Carlisle receivers made a couple plays over the weekend. Kutztown receiver Kurtis Ravenel Jr. had 38 yards on two grabs, plus a tackle, in a 37-29 win over Shepherd, and Slipper Rock’s Gavyn Barnes had two grabs for 23 yards in a 41-17 win over Seton Hill. (Bishop McDevitt’s Devyn Clair, a linebacker, had a pair of tackles for SRU.)

Back in Division I action, Harrisburg’s Donte Kent, a corner, had six tackles, an interception and two PBUs in Central Michigan’s 31-27 win over FIU. And his former teammate, Andre White Jr., pulled in five tackles for Texas A&M in a 20-10 loss to Arkansas. Another former Cougar, Ronald Kent Jr., had three tackles, half a tackle for loss and a fumble recovery in Western Carolina’s 52-34 loss to Gardner-Webb.