Colonial-Schuylkill League News and Notes: Tri-Valley and Minersville set for a rematch; Williams Valley begins its quest for a 2A title and Pine Grove gets a taste of the postseason 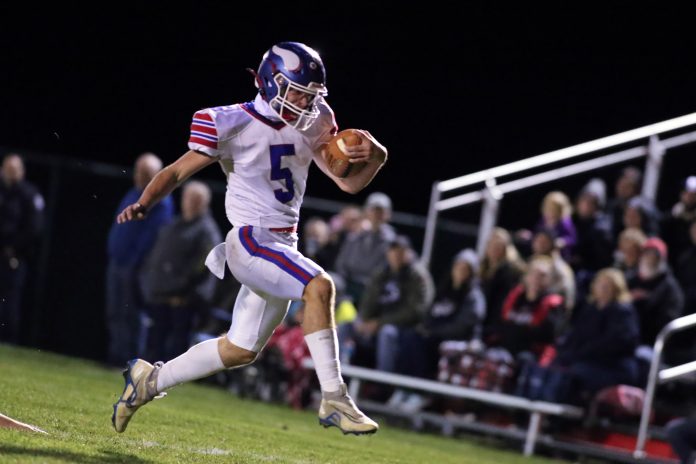 Tri-Valley and Minersville may not be sporting the same uniforms they were wearing in late August when they met for the first time.

But Friday night in the Hegins-Valley View Metroplex, good starts to promising seasons won’t be the primary objectives for the neighboring Schuylkill County combatants. Surviving to play next week is all that matters.

Matched up in the all-or-nothing District 11 Class 1A semifinals, Tri-Valley (9-1) and Minersville (6-4) will be dueling for the right to meet top-seeded Northern Lehigh or No. 4 Mahanoy Area in next weekend’s championship game.

A berth in the PIAA’s Class 1A playoffs also will be awarded to the eventual champ.

State-ranked Tri-Valley went into its regular-season finale hoping to deck rival Williams Valley and claim the Colonial-Schuylkill League’s Blue Division crown, but the Bulldogs dropped a 21-14 decision and saw those hopes end.

Kameron Wetzel scored both touchdowns for Jeff Sampson’s Bulldogs, cashing in on runs covering 34 and 9 yards for a Tri-Valley squad that was limited to 185 offensive yards — a mere 66 on the ground. Wetzel totaled 55 on 14 tries.

Quarterback Kole Miller completed eight of his 23 pass attempts for 106 yards, but he was picked off four times and the Bulldogs lost two fumbles. Jolten Flory caught three passes for 60 yards, while Layne Yoder had three grabs for 43.

Minersville mauled Nativity 37-0 in its regular-season finale, running up more than 400 offensive yards against the Green Wave. Luke Stevenosky had a huge game for the Miners, rushing for 221 yards and three TDs on 17 carries.

Stevenosky and A.J. Halford paced the Miners with eight tackles apiece, while Polinsky picked off one pass and fell on a Nativity fumble.

In the earlier meeting, Tri-Valley snapped a 13-13 tie on the second of Scheib’s two touchdown runs. Wetzel posted the other score for Sampson’s Bulldogs, who picked up a combined 251 rushing yards from Huntzinger (17-95), Wetzel (9-91) and Scheib (11-65). Yoder added four receptions for 70 yards.

Minersville totaled 272 offensive yards — a combined 120 on the ground from Carr (eight carries, 65 yards, one TD) and Stevenosky (7-55) — with Carr completing 10 of his 24 pass attempts for 151 yards and one score. He was intercepted three times, once each by Jake Tietsworth, Cole Gemberling and Kole Miller.

Tim Savage’s Williams Valley Vikings are riding a five-game winning streak into postseason play — they downed Tri-Valley 21-14 and captured the Colonial-Schuylkill League’s Blue crown — and are looking for one or two more.

Up first is a Saturday date in Williamstown with Allentown-based and pass-happy Executive Education (5-3). Williams Valley (8-2) also made its return this week to the state rankings.

Second-seeded Williams Valley totaled 248 yards in its win at Tri-Valley, getting nearly a 50-50 split between the passing and running attacks. Defensively, the Vikes limited the host Bulldogs to 172 total yards and forced six turnovers.

Brady Evans added three receptions for 50 yards and one score, but he also recorded one interception. Whiteash, Evan Achenbach and Aiden Miller added the other picks for the Vikes, who led 14-7 at half and 21-7 after three.

Should Savage’s Vikings prevail, they will square off with either top-seeded Palisades or No. 4 Catasauqua in next weekend’s 2A title game.

Pine Grove gets one more chance

Pine Grove (3-7) will have the chance to close out an up-and-down 2022 campaign on a winning note and capture a championship Thursday night when it visits Berks Catholic. The Eastern Conference’s 3A crown will be at stake.

Lane Lehman rushed 30 times for 108 yards and a pair of third-quarter touchdowns as Dave Shiffer’s closed out the regular season by grinding out a 14-6 victory over Marian Catholic. Lehman scored TDs of 1 and 4 yards.

Mason Kroh (7 for 10) added 66 yards through the air with Nick Wolff hauling in four passes for 25 yards.

Wolff also fell on a Marian fumble and Xaviar Yeagley picked off one pass for the Cards, while Lehman registered a team-high eight tackles.

Berks Catholic (4-6), which played a brutal non-league schedule, closed out regular-season play with a 49-28 victory over Elco. Rick Keeley’s Saints rang up a little more than 500 yards of total offense en route to the road success.

Josiah Jordan rushed 16 times for 192 yards and three touchdowns, fueling a ground assault that chalked up 312 lengths on 30 carries — an average of 10.4 yards per crack. The Saints, who led 28-14 at the half and 49-14 after three, also picked up 76 yards and a score from Michael Bradley on just two attempts.

William Hess attempted just six passes yet completed five for 191 yards and three touchdowns. Jordan (69) and Bradley (14) caught TD passes for their lone receptions, while Devin Garcia had two catches for 84 yards and one score.