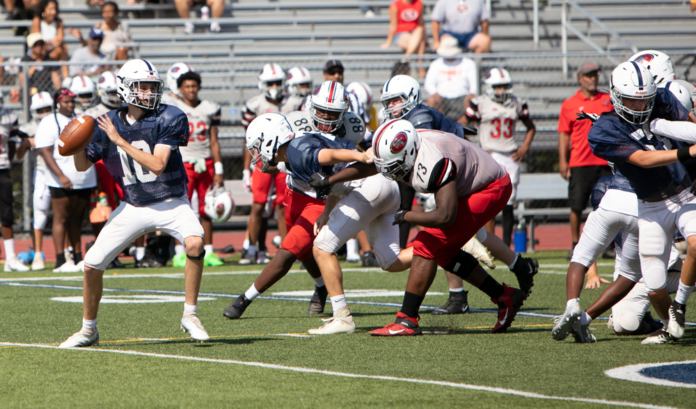 Entertaining its second opponent on its new artificial playing surface, Augie Glass’s Susquenita Blackhawks (1-1) hope to move above the .500 mark for the first time in 2022 when Schuylkill Valley (0-2) rolls into Cove seeking its first victory.

Glass’s bunch handled Biglerville 42-0 last weekend, riding an impressive individual effort from feature back Bryce McKee, who piled up 209 rushing yards on 20 carries and scoring on runs of 11, 2 and 14 yards. McKee amassed 173 rushing yards just in the first half.

Derek Gibney backed his classmate by completing 7 of his 11 pass attempts for 131 yards and a 20-yard touchdown throw to Kamar Lewis. Gibney added five runs for 29 yards, scoring twice.

Schuylkill Valley dropped a 31-14 verdict to Upper Perkiomen despite picking up 115 rushing yards and a pair of scores from quarterback Michael Goad. Dominic Giuffre chipped in 91 yards on 13 rushes, nearly rushing for 100-plus yards for the second weekend in a row.

Goad has thrown for 272 yards thus far, completing 25 of his 48 attempts. He’s been picked off five times and has yet to throw a touchdown pass. Giuffre has totaled 235 yards on 28 carries.

Aiden Ritter paced the Trojans defense by making five stops, including three for losses when UD totaled 11 on the night, and one sack.

After splitting its first two outings against perennial hammers Clearfield and Selinsgrove, Kurt Condo’s Juniata Indians (1-1) will be on one sideline as a high-octane West Perry outfit (2-0) wheels into Klingensmith Stadium and sets up shop on the other.

Juniata bulled to a 14-0 lead at Selinsgrove as Waylon Ehrenzeller posted a pair of 2-yard scoring runs. Ehrenzeller finished with 121 yards on 15 carries, but also paced the Indians with nine tackles. The host Seals rallied, claiming victory in the final minute.

Line Mountain (0-2) will try to begin climbing back to .500 when Brandon Carson’s Eagles visit neighborhood playmate Tri-Valley (2-0), a game that used to be one of the perennial fixtures in Twin Valley Conference play. For more, check out our Schuylkill County section.

Halifax (0-2) will be looking to crack the win column this weekend when Hancock (Md.) makes the lengthy journey to northern Dauphin County. While Earl Mosley’s club tumbled 48-14 at Midd-West, the Wildcats picked up an 88-yard touchdown run from Isaac Miller and an 80-yard TD heave from Teegan Carroll to Landon Areford. Miller finished with 115 yards on eight carries, but also posted 16 tackles — one fewer than Landan Klinger.

And Newport (0-2) will host Big Spring (0-2) at Katchmer Field. Todd Rothermel’s Buffaloes managed just 15 offensive yards in a 55-0 loss at West Perry, while Big Spring fell to Shippensburg 35-21 in a battle for the Little Brown Jug.