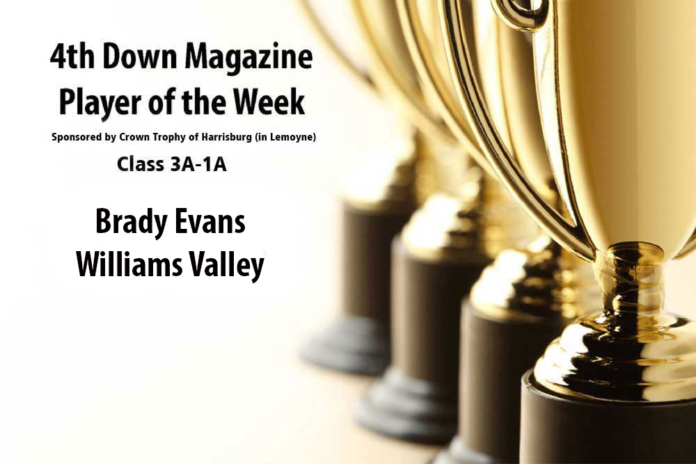 That’s two-time 4th Down Small School Player of the Week Brady Evans to you.

Williams Valley’s impressive wide receiver is the first 4DM repeat POTW champ this season after putting together one of the top receiving lines of last week. The junior hauled in five passes for 121 yards, scoring twice, in the Vikings’ 35-7 win over Marian Catholic. Williams Valley improved to 6-1 (4-0 Colonial-Schuylkill) with its third straight victory.

The performance adds to an already impressive season for Evans, who now has a team-best 28 catches, 471 yards and seven touchdowns while averaging 16.8 yards a grab.

Evans was last POTW two weeks ago with an eight-catch, 149-yard, two-TD performance. That week he earned a 4DM best 4,354 votes.

Evans and the Vikings return home Friday for a Week 8 tilt against 2-4 Shenandoah Valley before closing the season against Nativity BVM and Tri-Valley.