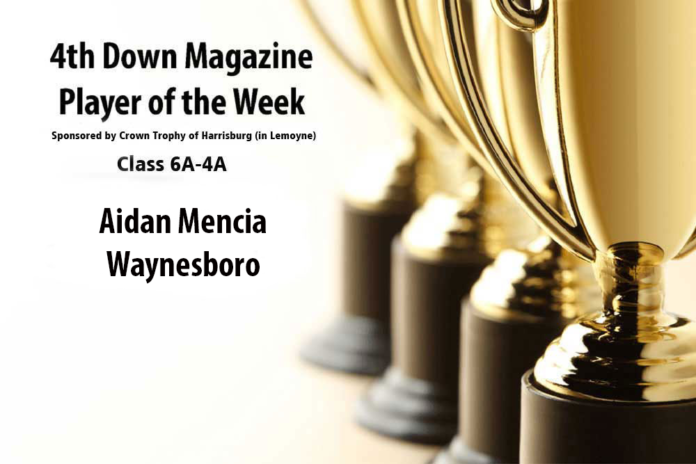 Waynesboro has thrived this season on a two-headed running attack that has produced more than 1,100 yards and 19 touchdowns (and nearly 1,900 yards and 27 TDs in total).

Some weeks its junior Mikel Holden putting up the big numbers. Other weeks, like in Week 7’s 52-7 thumping of Susquehanna Township, it’s senior Aidan Mencia.

Mencia shined in Friday’s victory, running for 96 yards and three touchdowns on just six carries in the Indians’ fourth Mid-Penn Colonial victory, earning himself this week’s 4th Down Big School Player of the Week. Most of the damage was done in the first half. (Stats were updated by the team on MaxPreps this week to indicate Mencia had 96 yards, rather than 120 like previously reported.)

Mencia is either first or second on Waynesboro in carries (84), yards (693), yards per carry (8.3) and touchdowns (eight) this season alongside Holden, making for one of the top one-two punches in the Mid-Penn. He has the Indians sitting comfortably in second in the Colonial at 5-2 (3-1) behind only unbeaten Shippensburg.

Mencia’s blowout performance earned him 1,074 votes, just narrowly edging out Harrisburg receiver Justin Cook’s 1,004 in one of the tightest votes of the season. Mencia picked up 44% of the 2,428 total votes cast, with Cook just behind at 41%.

The Indians next face East Pennsboro before closing out division play with Mechanicsburg and Northern.