Vote now: 4th Down Magazine Player of the Week presented by Crown Trophy 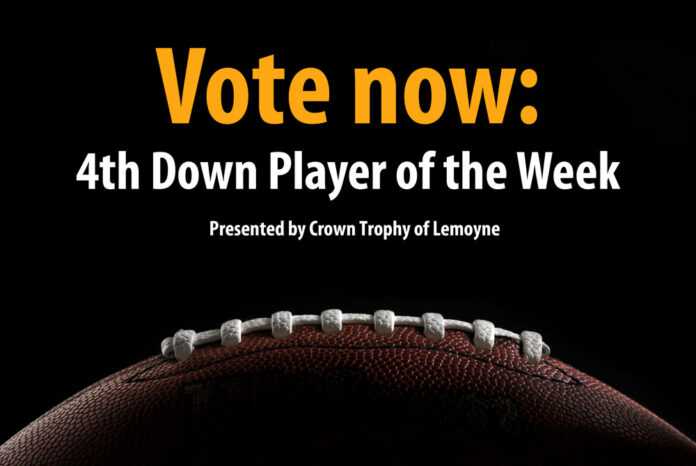 The poll will remain open until Wednesday at noon and voting is allowed once per hour. The winner will be announced Wednesday evening.

Tajae Broadie, DE-FB, Middletown: The 6-4, 220-pound junior accounted for 84 total yards (62 rushing, 22 receiving) offensively on 12 touches (10 carries, 2 receptions) in the 20-16 victory over Boiling Springs. Also had a sack, a forced fumble and blocked an extra point on special teams.

Sy Burgos, RB, East Pennsboro: The 5-7, 170-pound junior exploded in the fourth quarter in a 40-28 victory over Waynesboro. Two of his four touchdown runs, covering 12 and 69 yards, came in the fourth quarter when the Panthers outscored the Indians 19-0. Finished with game-high 116 yards on only seven carries.

Lek Powell, QB, Bishop McDevitt: The 6-0, 180-pound senior threw for 197 yards and four touchdowns in a 45-10 victory over Cumberland Valley. Powell has thrown for more than 500 yards with nine touchdown passes the last two games in wins over the Eagles and Cedar Cliff.

Daniel Shuster, QB, Camp Hill: What a shootout. The senior signal caller finished with 412 yards on 20-of-42 passing. While Shuster did throw three interceptions in the Lions’ 36-26 loss to Steel-High, he did fire four TDs to four different receivers, all of which went for at least 28 yards.

Cam Ochs, WR, Camp Hill: One of four receivers to haul in a TD for the Lions during a 36-26 loss Saturday to Steel-High, Ochs finished with five receptions, 174 yards and a 62-yard TD.

Micah Brubaker, QB, Mechanicsburg: A regular in these parts, Brubaker had arguably his best game of the season, finishing 16-of-22 for 224 yards and three scores (one going for 76 yards) while rushing 11 times for 76 stripes and a first-quarter TD. He has the Wildcats flying high at 4-0 after a 40-7 win over Susquehanna Township.

Caleb Brubaker, WR-DB, Mechanicsburg: Hey, look! The other twin! Caleb makes the cut after a seven-catch, 101-yard night that including two impressive TD grabs of 16 and 17 yards. He also had one of the Wildcats’ five INTs in the 40-7 win over Susquehanna Township.

Kiev Gregg, RB, Harrisburg: Mission accomplished. Gregg scored four times, all in the first half, to trip the mercy rule clock in the second half during a 49-0 win over J.P. McCaskey. Gregg played just 24 minutes, but scored on runs of 1, 27, 2 and 2 yards and finished with 11 carries and 77 yards.

Trenten Smith, WR-DB, Cedar Cliff: Smith Jr. scored on both sides of the ball and finished with six catches for 65 yards during a 42-0 whitewash of Palmyra. His two scores came in the first half, the first a 21-yard reception and the second a pick-6 before halftime.

Jesse Engle, TE-LB, Williams Valley: Engle was dominant defensively as the Vikings clipped Schuylkill 2 playmate Schuylkill Haven 22-7. In addition to making 12 stops from his inside ‘backer position — including one quarterback sack — the 6-1, 225-pounder returned an interception 40 yards for Williams Valley’s first score.

Chase Herb, RB-DE, Tri-Valley: Herb continued to stand out as Tri-Valley ran its record to 3-0 with a 47-7 thumping of Marian Catholic. Herb cracked 200 yards rushing for the second consecutive weekend, collecting 210 yards on 18 carries and scoring on runs of 1, 10 and 20 yards.

Shea Morgan, WR-DB, Pine Grove: Morgan had another big night in space, catching touchdown passes of 8, 51 and 8 yards as the Cardinals walloped Panther Valley 49-6. Morgan also converted all seven of his placement attempts.

Christian Snyder, RB-LB, Upper Dauphin: Snyder uncorked a terrific two-way effort as Upper Dauphin evened its mark at 2-2 with a 38-28 triumph at Halifax. Snyder rushed 16 times for 109 yards and one score, but was just as effective defensively as he piled up 13 tackles — including one for a loss.

Share
Facebook
Twitter
ReddIt
Email
Previous articleSunday Morning QB: East Pennsboro gaining momentum under first-year head coach; Mechanicsburg rolling, but still on the outside of 5A playoffs; Bubblers prove to be a quality program and more
Next article4th Down Magazine’s game balls for the week of Oct. 16-17