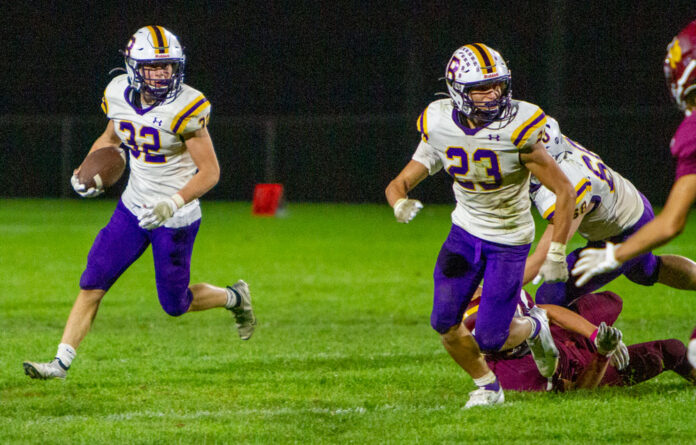 This was supposed to be the week where Bishop McDevitt was tested at another level compared to the last month. Cedar Cliff was the one team in the Keystone Division that could push back.

The Colts were never going to win the game. That was pretty obvious. Cedar Cliff would put up a fight and push back, though. At least a little bit. Maybe?

McDevitt wasn’t having any of it. The Crusaders made sure this game looked like all the others not named La Salle College. The result, 56-0, has nothing to do with Cedar Cliff, either. This is all about the firepower of the Crusaders. End of story.

The Crusaders had 469 total yards and led 42-0 at halftime. In my eyes this was an announcement game. McDevitt’s offense will find a way to get theirs at the Class 4A level. What quietly makes this team very appealing at the next level is they have a defense to back it up.

There will be no tests forthcoming, either, for McDevitt. There are more 60- and 70-point nights in October on deck. Don’t be disappointed in the Colts’ performance. They had zero say in this.

It was a pleasure to visit Newville Friday night for the Battle Of The Springs, where Boiling upended Big by 16 points in front of a packed house at Bulldog Field.

Check out my game recap and Making The Grade from the Bubblers’ 44-28 win. Tip of the cap to the Big Spring grounds crew for one of the best natural grass surfaces I’ve seen in years. That playing field is elite. Also, the playing of the alma mater while raising a school flag by the home stands with its own flagpole was a first for me. I had not seen that in my 30 years. Hint to other schools … borrow this one. It’s a keeper.

I was asked earlier in the week if either of these teams is capable of knocking off Steel-High. My answer was I’m not sure. Well, that answer has changed. Boiling Springs is fully capable of winning the Capital Division. Big Spring will put up a fight, too.

The Bubblers are seasoned, comfortable and confident in what they do and have more depth in terms of offensive weapons than you might see in one night. Their secondary is a major concern in a matchup against Steel-High. It’s Boiling Springs’ only real weakness. I think they have the linebackers and front to make the Rollers one dimensional, and if necessary this Wing-T offense can open up and be a balanced beast.

Speaking of the Rollers, that was a championship rally against Trinity. The emotions of that game, facing T-Rocks head coach and former Roller great Jordan Hill and plenty of his teammates who are now assistant coaches, isn’t easy.

Two late touchdowns by RB Taeyon Bratton allowed Steel-High to escape COBO Field with a six-point win. If you didn’t think this game would be close, you don’t understand football. Now, if Trinity can play at this level down the stretch they will make some noise. The Capital is a brutal division, though.

Palmyra continues to be the biggest surprise in the Mid-Penn Conference this season. The Cougars made it three wins in a row by besting winless Hershey 21-7. Richie Kowalski had an 11-yard TD reception and returned a kick 85 yards for a touchdown.

Last week the Cougars survived a shootout with Red Land where it took 48 points to win. This time around it was a tight and tense affair with the spunky Trojans. Adapting to play whatever the game dictates is all about confidence. And Palmyra has it.

A close second to the Cougars on the surprise meter in my book is West Perry. The 4-3 Mustangs took East Pennsboro out behind the woodshed by scoring 38 unanswered points to get the game to mercy rule status by the opening minute of the fourth quarter.

QB Marcus Quaker threw for 110, on 5 of 5 passing with a couple touchdowns, and ran for another 116, including a 67-yard gallop. Workhouse RB Trent Herrera went for 152 yards, averaged 6.6 per carry and had a couple scores. West Perry piled up more than 400 total yards before calling off the dogs.

To show the fine line between winning and losing, I offer up Cumberland Valley and Carlisle. The Eagles were caught and passed by State College in a game that was eventually decided in OT. The loss dropped CV to 3-4 despite a stellar game from QB Isaac Sines (293 total yards and four touchdowns).

Carlisle fell to 4-3 overall and has come close twice to getting a signature win this season after Central Dauphin kicker Ahren Stauffer nailed a 39-yard field goal as time expired to claim a 24-21 triumph. Good win for the Rams. A tougher loss for the Thundering Herd. I still think Carlisle is fully capable of finishing 6-4 this season. The effort is there, they have layers of talent and they have come close to getting over the hump twice.

Shippensburg keeps finding ways to put games in a box where they are completely comfortable and squeeze the life out of an opponent. The Greyhounds easily subdued Northern 21-3 to stay unbeaten. The Polar Bears put up a fight defensively, but Ship is a team that kills you with a thousand paper cuts. You can play well and still have little or no say in the outcome. That was what the ‘Hounds did to Northern.

Upper Dauphin is making a postseason push in the Liberty Division after snuffing out Susquenita by 32 points. QB Will Laskowski rushed for a pair of scores and threw for another — all in the first quarter — as the Trojans grabbed the horns of the bull in this one early.

Red Land’s offense has found another gear lately and is piling up points and yards thanks to QB Roman Jensen, who threw for 274 in a shutout win over Mifflin County. Very solid win by Mechanicsburg to end a two-game slide at Greencastle-Antrim. You know, the Wildcats are looking more and more like a seven-win team based on their remaining schedule.