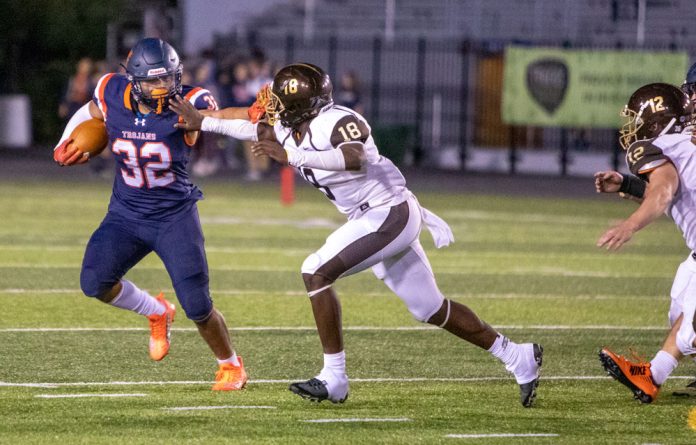 Halfway through the regular season there are still plenty of teams that continue to ride the consistency roller-coaster. Week-to-week results continue to span the gamut and that always makes high school football more fun.

For example, this week Trinity started to climb out of its tailspin by nearly doubling up Boiling Springs, once-beaten East Pennsboro had no problem at all dispatching previously undefeated Greencastle-Antrim, Carlisle had surrendered nearly 100 points its previous two games then turned around and limited Chambersburg to a touchdown to snap a two-game slide.

How about Central Dauphin? The Rams are clearly struggling this season and its defense has been battling to reach the standard for the program. It’s certainly closer after CD limited powerful State College to 19 points in a loss where the offense managed one touchdown. Still, you can clearly see this Rams squad continuing to battle despite a 1-4 mark.

Hershey now believes it can win games, and taking out rival Milton Hershey by a touchdown for the Cocoa Bean Bowl bragging rights shows what can happen when another potential close loss becomes a win. The Trojans have found that ever-elusive confidence. Hershey running back Angel Cabrera had 172 yards on the ground with a touchdown to pace the offense. And their defense came up huge twice, stopping the Spartans deep in the red zone on 4th-down.

For the fifth time in school history West Perry starts a season 5-0. I’m not sure what is more impressive, the 200-plus points scored or the 28 points surrendered through 20 quarters? I know the meat of the Mustangs’ schedule is on deck, but this squad is playing complementary ball and looks ready for a next-level challenge.

Hard to imagine Steel-High struggling offensively, and the Rollers didn’t necessarily struggle out of the gate; it seemed they were a little sluggish and searching for their stride. In a win over fellow state title contender Bishop Canevin and a setback to Westinghouse, a quality loss for sure, Steel-High failed to score more than 21 points. You just knew it wasn’t going to last, though. How about 135 points the last eight quarters, including 61 against Big Spring in Week 5?

Welcome back to the Mid-Penn Conference, Gettysburg. The Warriors are 4-1 overall and unbeaten against MPC squads after blanking Mechanicsburg 14-0 on Thursday night. Next up for Gettysburg is fellow one-loss outfit Shippensburg for Week 6.

Speaking of Gettysburg and Shippensburg, the duo comprises half of the four teams in the MPC Colonial Division that have each reached the halfway point with sparkling 4-1 records. East Pennsboro and Greencastle-Antrim are the other pair.

Speaking of East Pennsboro, the Panthers came out flying Thursday night at home against the Blue Devils with three first-quarter touchdowns on their way to a 23-7 lead. The defense took care of the rest. The game was more even than the final 30-13 final. Four Greencastle-Antrim turnovers was a difference maker.

Speaking of Thursday night games, there were three of them in Week 5. I don’t mind the odd Thursday game during the course of a season. But several of them on a weekly basis are being done for a reason is what it tells me. I’ll take Thursday night over Saturday night any day.

One of the more stunning results for Week 5 saw Lower Dauphin drill Red Land 49-3. All indicators told me this was a toss-up game. Falcons didn’t seem to think so, obviously.

Bishop McDevitt had no trouble rolling past Cedar Cliff, behind five touchdowns and 142 yards from RB Marquese Williams. The victory might have come at a cost as top WR Tyshawn Russell suffered a lower leg injury and was on crutches later in the game.

On Saturday, Harrisburg continued to regain its momentum with Coach Cal back at the helm, knocking off the previously undefeated Cumberland Valley Eagles in commanding fashion. The Commonwealth division racing is shaping up nicely with CV, Harrisburg and State College all vying for the title.

A week after Northern knocked off Shippensburg, the Polar Bears couldn’t keep the momentum going against Waynesboro in a 13-10 loss. Quality win for the Indians who previously had been struggling to find its footing.