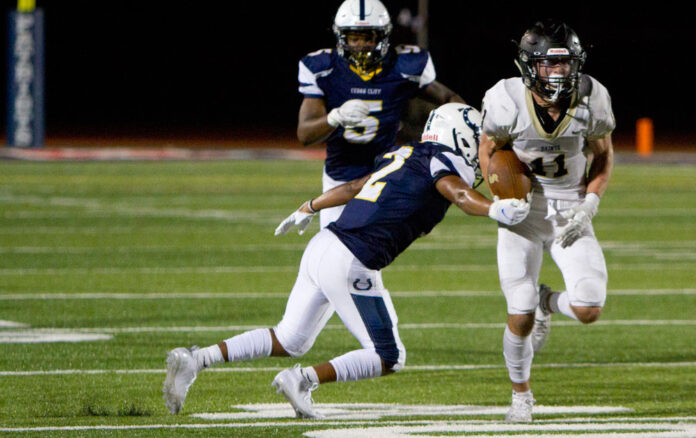 It was a strange start to the season for the Mid-Penn Conference with more people probably watching live streams than in the stands Friday night, but having any football to watch was a welcome respite to what 2020 has become in the midst of a global pandemic.

My preference these first few weeks is to stay at home since my wife has compromised lungs ﹘ and that means caution first, optimism later. I hope to return to covering games in-person at some point, but it wasn’t too bad catching bits of several games on livestream.

Since Cedar Cliff kicked off a half hour earlier than the rest of the slate and my main focus was on the Red Land at Hershey game, I caught a wild first quarter from West Shore Stadium. First, taking a game on a Tuesday against the squad like Berks Catholic is gutsy. Full props to the Colts for not caring who the opponent was.

And man what a start for the Colts. A kickoff return to ignite the fire from Jontae Morris covering 70 yards, and then on the first play from scrimmage Gannon McMeans hooked up with Trenten Smith for a 55-yard touchdown. Before the game was four minutes old it was 14-7 Colts.

A back-and-forth affair wasn’t settled until the second OT when the Saints went for the win with a two-point conversion and Hunter Garced stopped BC stud Justin Small right at the line to seal a 35-34 Colts victory. Something about the Colts and big games it seems.

A couple results qualify as surprising, although in 2020 you have to give some rope to everybody as each team’s situation is unique, right?

Cumberland Valley getting thumped by Altoona tops my list. It’s not that the Eagles lost, it’s how they lost. The Mountain Lions churned out more than 350 yards on the ground while CV struggled to post 100 yards of total offense. The two-touchdown final score seems about the only thing that was close.

I expected the Waynesboro-Shippensburg game to be tight, and it was. The Indians pulling off the upset was a mild surprise. The Colonial Division is going to be entertaining again this season.

Well done Greencastle-Antrim Blue Devils, going on the road to knock off the ‘Hanna Tribe at Roscoe Warner. Adam Root had a couple touchdown grabs for G-A to lead the way.

Boiling Springs say a fond farewell to that 11-game losing streak it dragged into 2020 by hanging a 51-burger on Susquenita. Congrats to the Bubblers. RB Joey Menke had 162 yards on only 18 carries and three touchdowns. Always good when your RB goes for 9.0 yards per carry.

Middletown, Bishop McDevitt, Central Dauphin and Steel-High each produced some monster offensive numbers in cruising to comfortable Week 1 wins. Nobody should be surprised, either. Crazy common thread for those four squads is they have multiple weapons that each showed up big-time right out of the gate. That’s attention worthy.

My biggest impact performance of the week goes to Camp Hill wideout Cam Ochs. The senior had three catches for 135 yards, and all three of his catches he took to the house in the Lions’ 35-28 victory over Line Mountain.