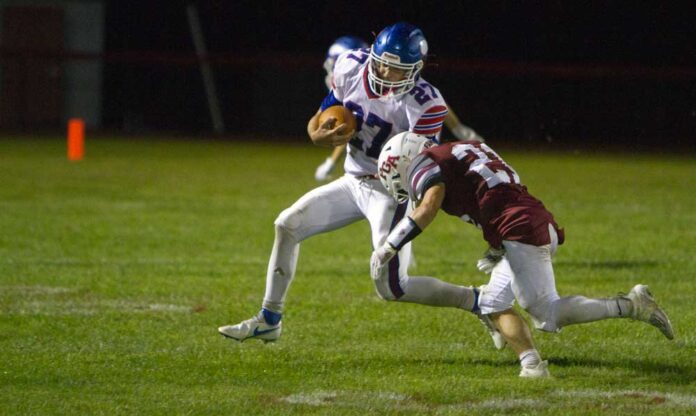 1. Tri-Valley pulls away to important result

Holding a 21-17 lead when the first half came to a close, Tri-Valley’s narrow advantage didn’t last long once the ball went up in the air some time later as Kam Wetzel returned the second-half kickoff to the house for the second week in a row.

That electric score suddenly had Jeff Sampson’s Bulldogs (5-1, 2-0) leading Nativity by double digits, with a 42-17 victory the eventual outcome. Wetzel added 89 rushing yards and three touchdowns, while Jake Scheib hammered for 107 more on just 12 carries. Scheib also ignited the Tri-Valley defense, racking up a team-high eight stops and recovering one fumble as the Bulldogs maintained their advantage in the District 11 Class 1A power rankings and atop the Colonial-Schuylkill Blue standings. Up next for Sampson’s Bulldogs is an encounter with visiting Panther Valley (0-5, 0-3), which last weekend fell 44-14 to Williams Valley.

Building an imposing lead by the end of the third quarter, Williams Valley parlayed its considerable cushion into a 35-7 triumph at Marian Catholic. Quarterback Isaac Whiteash targeted 11 of his 15 pass attempts for 195 yards and two touchdowns, both to rangy wideout Brady Evans (5-121). Feature back Alex Achenbach had a pedestrian outing by his typical standings, motoring 16 times for 121 yards and two scores.

He also caught three passes for 44 yards, just one weekend after wheeling for 334 yards and four touchdowns in the Vikings’ rout of Panther Valley. Tim Savage’s bunch allowed 100-plus yards to Matt Martin but limited the winless Colts to 171 total yards. Inside linebacker Jackson Yoder paced the Vikes (6-1, 2-0) with 10 stops, including one of Williams Valley’s five tackles for losses. Assuming the Vikes escape Shenandoah Valley (2-4, 2-1) this weekend in Colonial-Schuylkill Blue play, they’ll meet Nativity and Tri-Valley in their final two regular-season scraps.

Playing for the second straight week against programs with Canadian Football League mascots ­— last weekend it was the Palmerton Blue Bombers while this week it’s the Catasauqua Rough Riders — Pine Grove (1-6, 0-3) hopes to bring an end to its lengthy skid when it visits the Lehigh Valley for a Colonial-Schuylkill White clash. Unable to sustain a running game last weekend in their 51-7 setback to Palmerton, Frank Gaffney’s Cardinals were able to move the ball somewhat through the air as freshman quarterback Carson Lengle completed 16 of his 30 pass attempts for 201 yards and one score. He was picked off twice.

While Lengle hooked up with QB-turned-target Mason Kroh (3 receptions, 53 yards) for his lone score, he was able to find Nick Wolff eight times for 55 yards. Wolff also paced the Cards with 16 tackles. Catty tumbled to Minersville last weekend, falling 43-27 despite getting 79 rushing yards and one TD apiece from Elijah Soler and QB Christian Fye. Minersville’s John Adams went off, throwing for 384 yards and five touchdowns, three to Jason Cullen (5-189).