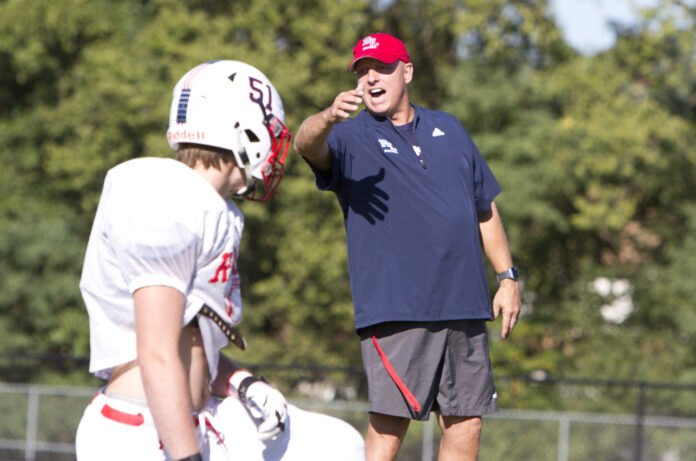 By Geoff Morrow
For The Sentinel & 4th Down Magazine

You can’t put a ring on it unless you first pop the finger back into place.

Such is love the Frank and Erin Gay way.

Two intensely competitive individuals who have devoted their entire lives to participating in and coaching athletics, Frank and Erin didn’t connect until well into adulthood at Red Land High School, where Frank is the career coordinator in the guidance department, and Erin is a health and physical education teacher.

Their relationship blossomed over some vigorous pick-up basketball games at Red Land nearly 10 years ago. At one point, the feverish rivalry led to Frank accidentally dislocating Erin’s finger, which he then (lovingly?) placed back into its joint.

A standout in football, wrestling and baseball at Central Cambria, Frank Gay was the longtime head football coach at Red Land, then took the same position at Camp Hill (2011-17) before returning to Red Land’s sideline in 2018.

Erin, an inductee to both the West Perry High School and West Shore halls of fame, starred (as Erin Sober) in basketball, softball and volleyball for the Mustangs, and she’s coached a wide variety of sports at various levels. She’s currently a middle school track and field coach and also the ninth grade boys basketball coach at Red Land.

The couple married in April 2015 on the front porch of their Newberry Township home and celebrated with a ceremony on the 50-yard line of the football stadium at Siebert Park in Camp Hill. This was after Frank proposed to Erin at center court at St. Bonaventure during halftime of an alumni game.

But some might say the relationship reached a new peak late this summer when, after years of bugging Frank to join his football staff, Erin was finally offered an assistant coach position on the first day of practice. Erin’s duties this season include conditioning, helping with receivers and defensive backs, handling paperwork, overseeing the scout team and helping Frank stay organized. It’s not glamorous work, but she’s doing it and has helped the Patriots to a 3-3 record heading into this week’s showdown with rival Cedar Cliff (7 p.m. Friday at West Shore Stadium).

Though they’re not exactly newlyweds, it’s certainly “new” territory for a husband and wife to both be coaching from the same football sideline. So, we decided to put them to the test with some game show-style questions:

(Note: Neither has seen the other’s answers. Until now. Some questions and answers have been edited for length and clarity, but editing was done carefully to avoid landing in the middle of two hyper-competitive adults who can outrun and out-lift pretty much all of us.)

Q: Frank’s most commonly used “coach” phrase during practice:
Frank: I have no idea.
Erin: I think he screams “Hustle!” about 20-25 times every practice. I can’t stand when players walk on the field.

Q: Erin’s most commonly used “coach” phrase:
Frank: Hustle.
Erin: There are so many to pick from.

Q: Who is most likely to start a sports argument, and who is most likely to win that argument:
Frank: I would start it. She says she will win, but I absolutely will win it!
Erin: I will definitely start it. If I start talking about sports and he doesn’t comment, I get mad and it turns into an argument. And I like to think that I win!

Q: Basketball, 1 vs. 1, game to 11, counting by 1’s and 2’s. What’s the final score, and who wins:
Frank: Well, it used to be me, but now that I have two new knees, she would win. But it would be close because it would get bloody! She would pay for each basket made!
Erin: Obviously I would win! We have played many times, and his only way of beating me is to either foul the crap out of me or he gets on this “out of his mind” streak. But I would definitely win, 11-5.

Q: Golf, 18 holes at Valley Green Golf Course, who wins:
Frank: I would win hands down! She can’t stay focused for 18 holes.
Erin: Golf is very serious for him! I would definitely lose. I would also use my foot wedge multiple times, pick it out of the sand or move the ball into a position that I like. I would play well for about six or seven holes, but then I would lose focus. Not Frank! All serious all the time on the golf course!

Q: Who is most likely to wake up in the middle of the night angry or frustrated over a missed call:
Frank: Me. I can’t sleep if something like that happens.
Erin: When my head hits the pillow, I am out! Frank, however, will wake up thinking about how he needs to fix something or excited about practice starting or the first game.

Q: Who is mostly likely to chew out an official:
Frank: Well, with her being an official, it would be me. She tries to stay loyal to her fraternity. In basketball, she can recite the exact rules. Hard to argue with that!
Erin: I got my first sideline warning at the McDevitt game. Ha! Frank spun around and yelled, “Who said something?” I have been known to have some words with officials. Frank will say something, but he normally lets it go. He will definitely chew out the player! But he has settled down more as he has gotten older.

Q: Worst temper when it comes to athletics:
Frank: Absolutely me. But I hardly ever cross the line. In 31 years, I have had only two 15-yard penalties.
Erin: Me! I am extremely competitive, and I HATE to lose. I rant and rave for a few days after a loss. Frank is better at letting it go and moving onto the next game.

Q: Among dogs Lily and Hooper and cats Duncan and Midnight, who is most likely to fall asleep on or next to Erin on the couch:
Frank: Duncan.
Erin: Dunkin. He is my buddy.
Editor’s note: Same answer. Different spellings!

Q: Who is the most romantic, and what was your last grand romantic gesture:
Frank: Me! I tell her I love her every chance that I get!
Erin: Not me! Frank is probably more romantic, but not by much. Our ideas of dates are eating out at Giant and getting a salad, going to a sporting event, or going to Dick’s to shop. My last romantic idea was for Christmas last year: I bought him tickets to a Def Leppard concert, and he had to open five different presents leading up to the actual gift. Unfortunately, the concert got canceled because of COVID!