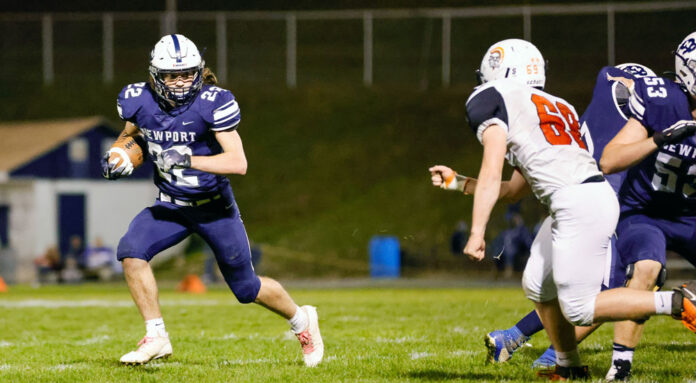 Trailing 26-7 at the halftime break to an undefeated Oil City squad, things looked mighty, mighty grim for Juniata as it huddled at Altoona’s Mansion Park. And while Jacob Condo’s 70-yard touchdown pass to Manny O’Donell was one of the few first-half bright spots for the Indians (5-2), it wasn’t long before Kurt Condo’s club began digging into the District 10 Class 4A champions. Although Zach Harr’s 30-yard fumble return late in the third quarter pulled Juniata within two scores, a pair of short touchdown runs by Yaneil “G.G.” Ortiz had the Indians sporting a 27-26 lead with just less than nine minutes to play. A minute or so later, Holden Stahl fired a 76-yard touchdown pass to Dakota Cole and Cole tacked on the two-point try as the Oilers held a 34-27 advantage. Juniata made one last push to move into the next round of the PIAA Class 4A playoffs when Jacob Condo hooked up with Caleb Seeger for a 5-yard score with 31 seconds left. Condo was stopped on the ensuing two-point try, meaning Juniata’s bid to advance had been halted despite a valiant second-half rally that gave the Indians a chance to win in the closing seconds.

Finally able to play a game following a two-week break, Newport didn’t seem to be bothered by the layoff as the Buffaloes trimmed Upper Dauphin 42-28 at Katchmer Field. Thomas Pyle rushed for a career-high 162 yards and two touchdowns, and he tossed a TD pass to QB Andrew Bates for a third score. Meanwhile, Bates ran for 116 yards and one score, fired two touchdown passes to Will Davis and caught one TD toss from Pyle for another score. Trading scores throughout the first half, Todd Rothermel’s Buffaloes (3-2, 2-1) carried a 21-14 lead into the break when Bates broke off a 33-yard TD run with 1:38 to play. And Bates found Davis for a 5-yard score midway through the third quarter to make a two-score game. UD was able to answer Newport’s next two scores, but when Pyle tacked on a 47-yard score with 5:08 to play, the Buffs were up 42-28. On tap for the ‘Port is a trip to Halifax (1-5, 0-4) for a Mid-Penn Liberty Division scrap. Like Rothermel’s Buffs, Halifax will ride into Friday night’s contest with some momentum after ending a 17-game skid last weekend with a 37-32 victory over Trinity. Bryce Enders rushed for 272 yards and touchdowns of 52, 44, 60 and 9 yards to lead Earl Mosley’s Wildcats, but it was Zander Conrad’s short TD run with 4:38 to play that finally turned the result in Halifax’s favor. Conrad led the ‘Cats with 14 tackles, two more than Ryan Stahl.

Stunned by a Penns Valley side they’d scheduled merely one day earlier, Line Mountain will be trying to end a two-game losing streak Friday night at Ressler Field when Mifflinburg (5-4) pays a visit. Brandon Carson’s Eagles (4-3) appeared to be in decent shape when QB Jacob Feese fired a 30-yard touchdown pass to Garret Laudenslager on a quick slant, but the hosts found themselves down 21-12 at the half once Penns Valley turned a fumble into points. The Rams added two second-half scores, sending Line Mountain to a 35-12 setback that arrived just one week after Southern Columbia smacked the Eagles 49-7 in the District 4 Class 2A semifinals. Mifflinburg (5-4) squeezed past Shikellamy 13-7 in overtime on Cade Dressler’s 5-yard run just one week after the Wildcats were handled 48-7 in the District 4 Class 4A semifinals by top-ranked Jersey Shore. Speedy QB Jacob Reitz, who paced Jason Dressler’s squad with 55 rushing yards, logged the ‘Cats’ first score.

Idled for 17 days before returning to the field earlier this week, Upper Dauphin (2-4) hung in with Newport before falling 42-28. Chance Crawford rushed for 65 yards and two scores, Brady Morgan added 65 rushing yards and a TD, while Christian Snyder paced Kent Smeltz’s Trojans with 92 rushing yards. Tyler Cleveland passed for 143 yards — Kyle Casner latched on to a handful of Cleveland aerials for 107 yards — with his 14-yard throw to Casner initiating the UDA scoring. Big Spring (4-3) will roll into Elizabethville Saturday night sporting a two-game winning streak. The Bulldogs last weekend rallied past Susquenita, defeating the Blackhawks 28-21 in overtime despite trailing 21-7 at the halftime break.