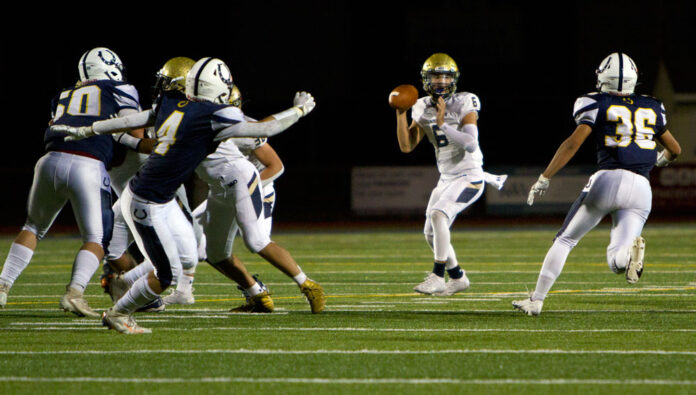 Keystone Division left out of the District 3 playoffs:

Nobody from the MPC Keystone made the cut for the District 3 playoffs despite hosting a pair of 5-0 squads — Bishop McDevitt and Hershey. Each has a valid reason for being frustrated with what went down, but the bottom line was the lack of depth in the Mid-Penn Conference overall and in the Keystone Division in particular hurt both teams. You can argue Bishop McDevitt, a powerhouse program, has a more legitimate beef than the surprise 5-0 Trojans. I don’t see it that way. Each lost out on equal undefeated terms. The other factor here is this is not a normal year, right? The volatility of District 3 power ratings over the first 5-6 weeks is somewhat normal. In a normal year, generally speaking, the best time to start paying attention to the power ratings is after Week 7. It’s calmed down by then. In a shortened year with condensed brackets, this was always going to happen. Hershey missed in Class 5A and finished behind a 4-2 team in the No. 6 hole. That tells you how much the opponent’s weighted winning percentage (OWWP) matters. The four teams that made it in Class 5A are also undefeated. Bishop McDevitt fell victim to a perfect storm in Class 4A with all four teams ahead of them also being undefeated. But the kicker for the Crusaders — and this really hurt — was all of the other teams on their schedule that determine their OWWP lost in Week 5. Guess who plays this week at the Concrete Palace (Hersheypark Stadium)? Bishop McDevitt will pay a visit to Hershey. Isn’t that interesting.

Congratulations to Palmyra for picking up win No. 1 on the season by using three interceptions and scoring 34 points to knock off Mifflin County. The 34 points by the Cougars was more than they had scored in the three previous games combined.