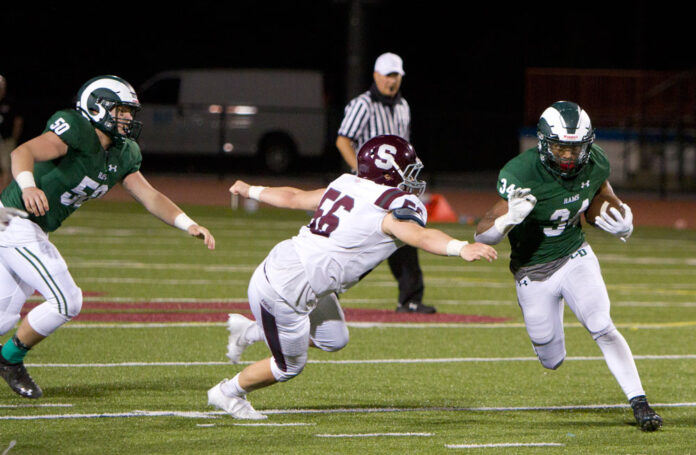 Inside The Mid-Penn Conference

Central Dauphin LB-RB-WR-KR Timmy Smith already has 625 all-purpose yards for the Rams in only three games. For all of his offense, don’t forget he was an All-State linebacker a season ago. Smith has 322 rushing yards, 160 receiving, 122 on kickoff returns and 21 on punt returns. Smith also has six touchdowns. There is literally nothing he can’t do. Overall, the Rams’ offense is averaging more than 500 yards a game. With such a diverse set of weapons, slowing them down is going to be difficult at best.

Harrisburg explodes our of the gate:

That was a powder keg of offense Harrisburg unleashed on Berks Catholic, still a quality Class 4A program, after 11 months between games. Based on the Saints’ defense this season, the Cougars putting up 62 was not a real surprise. Harrisburg coach Calvin Everett is still looking for two more games before the Oct. 26 deadline to be eligible for the District 3 playoffs. Harrisburg will play J.P. McCaskey this week, so that’s two of the four he needs before the deadline. The clock is ticking.

Down year for the Commonwealth?

It’s a strange season in so many ways as we all already know, and that includes the Commonwealth Division sporting an 8-11 overall mark with only two teams, Central Dauphin and Altoona, boasting a winning record. Harrisburg isn’t included. Overall, the division is down from its normal standard of being one of the deeper divisions in Pennsylvania.

State College will pick up steam with each passing game after dropping its opener to Central Dauphin. You could see the Little Lions have plenty of emerging talent on both sides of the ball that will serve them well in the near future. Dominated Cumberland Valley 31-0 in their second game, and my sneaky suspicion is they will make big strides with each passing week.

Panthers racking up the miles:

For the record, CD East, which literally will play anybody, anywhere with a defense that travels extremely well, has already traveled more than 400 round-trip miles to play its three games. Road warriors!