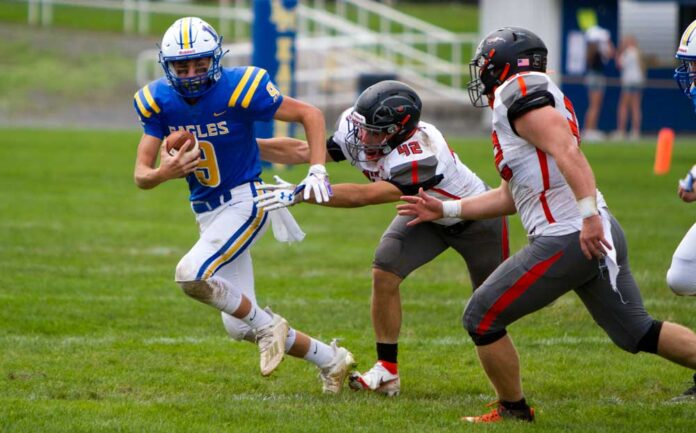 When Upper Dauphin athletic director Jody Godsey quickly jumped at the chance to play pass-happy Executive Education a few weeks ago after Halifax was unable to play, it was a potential collision with a Columbia squad that likes to air it out that Godseyand UDA had in mind.

While UDA brought numbers and plenty of heat against Executive Education, Footman (106 carries, 440 yards and 14 TDs) will bring it down and go. Another threat is Steven Rivas (67-469, 7 TDs), who last weekend ran nine times for 156 yards and three touchdowns in a romp over Pequea Valley. Whether Columbia can stop or even slow down the Trojans’ multi-pronged ground attack that has bodies moving in every direction remains to be seen. UDA will go at the Tide with backs Christian Snyder, Brady Morgan, Alex Hepler, Aiden Wiest and QB Wil Laskowski. While Morgan returned to action in last weekend’s 48-14 thumping of Newport, Laskowski completed all 10 of his pass attempts for 258 yards and three touchdowns. He also ran five times for 42 yards and another TD. So, if the track atop the hill in Columbia is favorable, take the over.

Although Susquenita (5-4) would prefer to forget last weekend’s 52-20 loss to Mid-Penn Liberty Division champion Juniata, the Blackhawks are back in the postseason mix for the first time in quite a while. Awaiting Augie Glass’s club in the District 3 Class 2A semis is top-seeded York Catholic (9-0), which tumbled to Camp Hill in last season’s 2A title game. Eric Depew’s Fighting Irish eased past York County Tech last weekend, but the YAIAA Division III champions plan to turn dual-threat QB Levan McFadden loose on Susquenita.

McFadden has rushed for 532 yards on 88 attempts and scored 11 times, but he’s also thrown for 576 yards and eight TDs while completing 31 of his 67 pass attempts. Andrew Adams also will play a large role offensively, as he’s gained 1,007 yards on 164 totes and scored nine TDs. Quinn Brennan has hauled in 13 throws for 334 yards and four touchdowns, while Daniel Sterling has seven receptions for 139 yards yet hasn’t found the end zone. Watch out for undersized middle linebacker Nick Creisher, who averages nearly 11 stops per game. Susquenita’s running game was stifled last weekend by Juniata (minus-2 rush yards), but sophomore QB Derek Gibney threw for 172 yards and two touchdowns — both to his twin brother, Drew (5-92). Derek Gibney also rushed for a late TD. If the ‘Hawks can flush last weekend’s setback — Glass’s bunch trailed 45-0 at halftime — they might be able to match whatever York Catholic brings. If not, look out.

Even though Juniata’s stingy defense finally allowed some points last weekend after pitching three consecutive shutouts, Kurt Condo’s Indians (8-2) already were sitting on a 52-0 lead at Susquenita when the Blackhawks scored three times. Regardless of what happened in the final 19 minutes of that Week 10 affair, Juniata bounced off with the Mid-Penn Liberty Division championship. The Juniata secret was simple: A  powerful rushing attack and an equally effective run defense. While the Indians wound up with nearly 350 rushing yards, nearly 320 of those came before halftime as Condo’s group motored to a 45-0 lead. Zachary Harr (11-138), Seth Laub (11-129, 1 TD) and Waylon Ehrenzeller (11-84, 1 TD) combined for 351 rushing yards and five touchdowns as Juniata’s ground game punished the host Blackhawks. As for the Juniata defense, that unit limited Susquenita to minus-2 rushing yards and forced a pair of fumbles.

Next up for Juniata is a return to the District 6 Class 4A title game at Altoona’s Mansion Park, where the Indians will square off against Bellefonte (2-7). Juniata prevailed in last year’s final, claiming its first district title with a 24-21 victory. This year’s Bellefonte bunch averages a little less than 160 offensive yards per outing, which suggests the Juniata D could find conditions favorable for a repeat. Nolan Weaver has rushed for 317 yards and two touchdowns on 60 carries to lead the Raiders, but he’s also caught 11 passes for 56 yards. Whichever side prevails will get either DuBois or Pittsburgh’s University Prep in next weekend’s regional final.

Believe it or not, Line Mountain is back

On the outside looking in as the regular season splashed to a close, Line Mountain (2-7) already was planning to finish up against Panther Valley until the Eagles learned they were No. 8 in District 4’s Class 2A power rankings. So, instead of making a lengthy trip to Panther Valley, Brandon Carson’s club will carry its two-game winning streak to suburban Elysburg for a scrap with perennial hammer Southern Columbia (9-1). While Carson’s group downed James Buchanan 41-13 last Friday behind 167 yards and three touchdowns from diminutive feature back Nolan Baumert, the Eagles also registered 26 tackles for loss against the Rockets with Brayden Boyer bagging six.

Explains why JB was held to minus-38 offensive yards. One night later, Jim Roth’s Tigers spotted Danville an early field goal before roaring back for a 55-3 triumph — despite the dense fog that rolled into Montour County. Kent State recruit Gavin Garcia carried the ball just seven times for 209 yards, but he scored on runs of 52, 62 and 62 yards. Garcia has wheeled for nearly 1,500 yards and 23 scores, but he’s also returned a handful of kickoffs and punts for TDs. Actually, the Tigers have home run threats all over the place in Garcia, Wes Barnes (75-525, 8 TDs) and Braeden Wisloski (33-377, 3 TDs). Then, there’s rangy wideout Jake Rose (19 catches, 366 yards, 5 TDs), the outstanding track athlete at last spring’s PIAA Class 2A championships.

Line Mountain was Southern’s first postseason victim last season, falling 49-7 to a Tigers squad that won its sixth straight D4 Class 2A title and eventually claimed its fourth consecutive PIAA Class 2A crown. Told you the Tigers were perennial hammers.