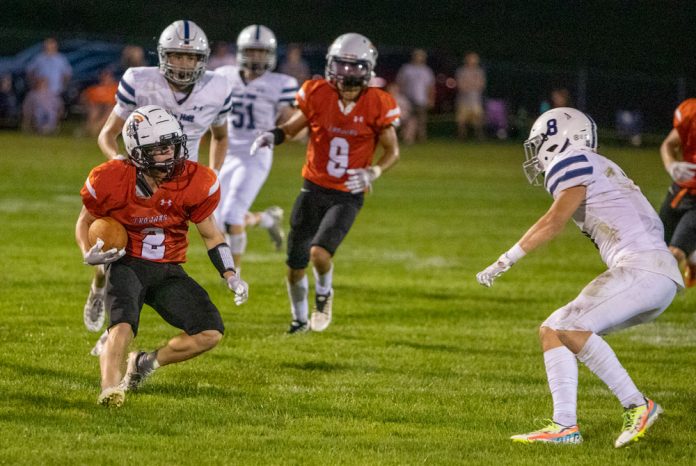 As the seven football programs that call the Mid-Penn Liberty Division home ready for their respective league openers, only one can say they’re going in on a winning note.

That’s right, only Halifax (1-2) is heading into Mid-Penn Liberty play on a one-game winning streak. And Mosley’s Wildcats generated all sorts of positive waves by walloping Hancock (Md.) by a 53-0 score. By the way, all 53 of those points arrived before halftime.

Junior hammer Isaac Miller added 100 rushing yards on eight attempts while scoring twice, while Peter Ranck chimed in with 65 yards and one score on a mere three totes.

Halifax attempted just three passes in its lopsided victory, completing one as freshman QB Teegan Carroll hooked up with Ranck on a 27-yard touchdown pass.

Miller also was a beast defensively, totaling 10 tackles, including one for loss. Carroll booked the ‘Cats’ lone quarterback sack, but he also fell on one of Hancock’s three lost fumbles.

Well, making the lengthy journey to northern Dauphin County is a James Buchanan contingent (2-1) that defeated York County Tech and Clear Spring (Md.) in Weeks 1 and 2, respectively, yet were upended 21-14 by a Biglerville side that rushed for 204 yards against the Rockets.

Stoner completed 7 of his 11 pass attempts for 134 yards – with five throws going to Spencer Line for 115 yards. JB also was pestered by racking up 12 penalties for 88 yards.

Unable to get its potentially combustible Pistol Wing-T cranked up and humming on every possible cylinder last weekend, Upper Dauphin (1-2) is hoping to rejuvenate its offensive attack this weekend when Susquenita (1-2) motors into Elizabethville.

Yet despite its inability to cash in repeatedly, Kent Smeltz’s Trojans trailed undefeated by just two points (14-12) heading into the final quarter. UD, however, never could get closer as the pass-happy Lions trucked home after pocketing a 26-12 triumph.

UD’s defense held up fairly well against Camp Hill’s vaunted passing attack, limiting the Lions to 150 yards while yielding three TDs. Caleb Snyder led the Trojans with eight tackles – including three behind the line of scrimmage – and added one quarterback sack.

Susquenita was roughed up at home for the second time in as many tries, surrendering 384 offensive yards to a Schuylkill Valley club that was winless when the Panthers arrived in Cove. Schuylkill Valley picked up 250 yards on the ground, which might have UD salivating.

Derek Gibney threw one touchdown pass – twin brother Drew latched on – and crashed over for the Blackhawks’ other TD. Those two may need to play big against the host Trojans.

Juniata and Newport to renew lengthy rivalry … in Mifflintown

Undoubtedly steamed after dropping its second straight outing, Kurt Condo’s Juniata squad (1-2) will be trying to rebound from consecutive setbacks to Selinsgrove (17-14) and West Perry (24-0) when winless Newport (0-3) strides into the Kling for the umpteenth time.

Todd Rothermel’s Buffaloes conceded 461 offensive yards one week ago in a 47-0 loss to Big Spring – with 334 coming on the ground. Conversely, the ‘Port managed just 157 total yards, with Aiden Dishman rushing 16 times for 83 lengths. Two fumbles also stung the Buffs.

Juniata struggled mightily when it had the ball, totaling merely 99 yards against the undefeated Mustangs. Steady senior Waylon Ehrenzeller picked up 48 rushing 48 yards on 11 attempts and caught one pass, but he was all over the place defensively (15 tackles/one fumble recovery).

In case anyone needs a timely reminder, Condo’s Indians are the reigning Mid-Penn Liberty Division champions after skipping through the 2021 regular season with a perfect 6-0 mark.

With everyone else in the Mid-Penn Liberty engaged in divisional play this weekend, Line Mountain (0-3) will try to break into the win column when Marian Catholic (2-1) steams into lower Northumberland County’s Glenn Ressler Field.

Brandon Carson’s Eagles were originally scheduled to entertain Middletown, but a Week 4 opening in Line Mountain’s schedule developed when a hazing incident led to the Blue Raiders scrapping the 2022 campaign and sending lots of folks scrambling to find opponents.

While Line Mountain’s opponents thus far have a combined 9-0 mark, the Eagles nearly dealt Tri-Valley its first setback – but the Bulldogs used a Jake Scheib short-yardage blast with just over 50 seconds to go to take their first lead and pull out a 35-28 victory.

Nolan Baumert rushed for 84 yards and a pair of touchdowns to lead Carson’s Eagles, while Chandon Maurer and Ian Bates also cashed in on short TD runs. Line Mountain also received production from Tharon Wagner (3 carries, 26 yards/2 receptions, 42 yards), who was making his first varsity appearance since the 2020 season.

Maurer and Max Johnson paced the Line Mountain defense with nine tackles and 2.5 stops for loss, while Quinn Dunkelberger chipped in a handful of hits, one tackle for loss and a QB sack. Johnson and Brayden Boyer also posted sacks while sharing a handful of hurries.