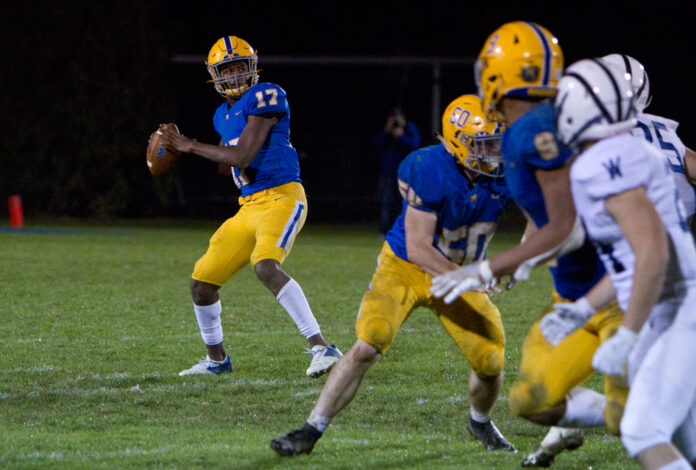 Wyomissing started fast with 14 quick points in the District 3 Class 3A championship game with Middletown and never looked back.

This was the fifth consecutive year these two squads have met in the playoffs. The first three went to Middletown and now the Spartans have claimed two in a row.

There’s a lot to like about Wyomissing’s vintage Wing-T offense this season. But the hammer for this squad is a defense that flies to the ball and sets the edge with authority. Middletown had chances in the second quarter and the Spartans’ defense made the Blue Raiders go away quietly on their way to a 38-16 victory.

Quarterback: All you need to know about the value of Zach Zechman running this offense is two of the three Spartans’ touchdowns in the first quarter came through the air. And both throws came under pressure. He didn’t attempt a pass the second half. Because he didn’t need to. He’s a weapon . Grade: A

Running Back: FB Evan Niedrowski is a load at 6-2, 240 pounds. And when he gets to the second level rolling downhill he forces guys to make tough choices when it comes to tackling him. He is not easy to get to the ground. Pounded his way to 167 yards on 20 carries with a dozen or so broken tackles. They have a nice variety of halfbacks (Wing-T term) that all fill a variety of roles. Niedrowski sets it all up, though. Grade: B+

Wide Receivers: Aiden Mack is a very good Wing-T blocking tight end, but they also use him in the passing game. He made a nice TD grab, but also dropped an easy one in the flat for a first down. They like to sweep those halfbacks out in the flats to catch passes and that’s hard to defend.  Grade: A

Offensive Line: Run blocking on the inside was superior. Early on Wyomissing had success with the counter play they dearly love. But Middletown adjusted and this group struggled to get that blocked after the first quarter. The key to a great night was the passing blocking. It was outstanding and giving Zechman time kept the Blue Raiders defense off balance. Grade: A

Defensive Line: They float a lot of guys in and out on the inside, but the result was the same. These guys get off blocks with a purpose and fly down the line of scrimmage with plenty of zip. Inside gap discipline was superior. Limited Middletown to 79 yards on 30 carries. Well done. Grade: A

Linebackers: Niedrowski is a fullback on offense and you can tell for a 240-pound dude he’s athletic as well. When he plays inside linebacker you can see his speed more clearly. He closes a gap. Thomas Grabowski, his partner in the middle has great instincts for where the play is going. Jack Feightner stood out to me on the outside. He was all over the field. Grade: A

Secondary: Middletown has some very respectable receivers and they were covered up and muted in terms of impact all game. Run support on the stretch plays outside was also very good. Grade: A

Special Teams: Kicker Aidan Cirulli has a big leg and pounds the ball through the uprights on extra points. Kick returns were solid, but they surrendered a 97-yard kickoff return for a TD and gave up another 50-yard return. And a bad punt snap cost them a safety. Grade: C-

Quarterback: First game for junior Tony Powell this season. Glad he made it back on the field in 2020. But man against a defense this fast and aggressive … it was a tough ask of any player with all the rust. I can’t imagine how tough it was for him. He didn’t get much help up front with time to throw, so his delivery of the ball was hurried. First game in the district final is just tough. Grade: C+

Running Back: On his second carry Tymir Jackson fumbled and it led to seven points that made it 14-0. He ran hard, but there wasn’t much room to roam inside the tackles. Finished with only 40 yards on 16 carries. Grade: C+

Wide Receivers: They tried every way in the playbook to get TE Tajae Broadie the ball. Wyomissing knew it too and had him covered up. Still managed five grabs, but only 29 yards. Finding open receivers more than five yards downfield didn’t happen. Grade: B-

Offensive Line: This was always going to be critical for the Blue Raiders to have any success and they struggled big-time against an attacking front that was just faster and stronger.  Grade: D

Defensive Line: Jackson had a couple tackles for a loss and had a quarterback hurry, but Broadie was pretty quiet on defense. The Wyomissing OL is elite at this level. Adjusted well to the counter play, though. Inside fullback runs were breaking the first wave too easy. Grade: B-

Linebackers: This group really struggled on the inside with fullback runs going for big yards with plenty of missed tackles. Outside they were burned early on a couple of those buck sweep counter Wing-T thingies before adjusting pretty well. But the damage had already been done. Grade: C

Secondary: I will say this, this group made a lot of tackles downfield and was the adjustment to make the counter play go away after it killed the Blue Raiders in the first quarter. Pass coverage was average, but tackling in space and run support was outstanding. Grade: B+

Special Teams: Derek Wall had 193 yards on three kickoff returns including a 97-yard return for a touchdown. Great night from him. Kick coverage overall was fine. That fake punt run that turned into a last punt that traveled six yards was a bad call to open the second half. Gave the Spartans a short field. Grade: B