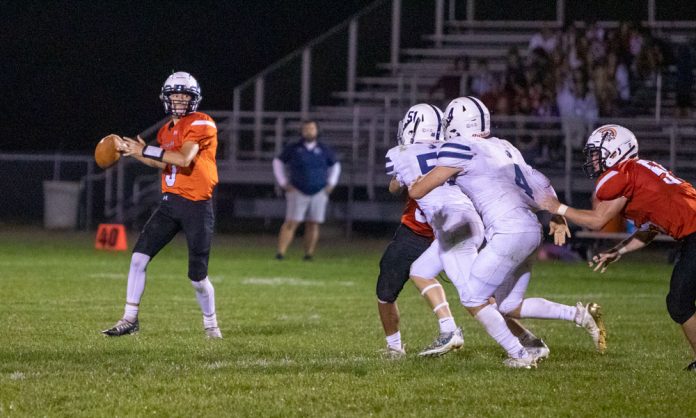 Although Juniata’s bid for a second consecutive Mid-Penn Liberty Division outright championship was short-circuited by a pick-six and a lost fumble in the final minute, the Indians can still claim a share of the crown.

That’s right, as of right now, Upper Dauphin has merely cornered a portion of the Liberty Division’s title. The Trojans are the last remaining league unbeaten.

In order to accomplish a two-fer of sorts, Kurt Condo’s Indians (5-3 overall, 3-1 in Mid-Penn Liberty) must rebound from their disappointing loss by defeating a surging Line Mountain (4-4, 3-1) club bound Friday night for the Kling.

Line Mountain has won four of its last five outings. Or, to toss out another perspective, the Eagles have emerged victorious whenever Ian Bates has rushed for 100 or more yards. And that’s four of the past five contests.

Quarterback Kaiden Maurer also has played well for Brandon Carson’s squad, completing 12 of his 16 throws for 154 yards and one touchdown in a victory at Halifax before going 4-for-7 for 86 yards and two scores in last weekend’s 48-8 thumping of James Buchanan that was 41-0 at the break.

As for Bates, he gained 177 yards and scored four first-half touchdowns as the Eagles constructed their sizable lead and kicked in the mercy rule.

Getting two rushing touchdowns from quarterback Aaron Kanagy (9-67), the Indians began the fourth quarter with a one-score lead before Upper Dauphin rallied for a victory sealed when a Kanagy pass was deflected to linebacker Aiden Ritter and he carried it the final five yards for the game-winning score.

Juniata’s defense was typically stingy, limiting UD’s Brady Morgan to 13 rushing yards on four attempts. The Indians did get bumped up a bit by Konner Walker, who picked up 128 yards on seven carries, including a 63-yarder.

Susquenita also trying to stay in the mix

Sporting its own championship hopes, Susquenita (4-4, 3-1) needs some help but the Blackhawks can stay in the title chase by winning at James Buchanan (3-5, 1-3). ‘Nita has won two straight, while JB has lost four in a row.

Mason Figard had a memorable two-way night for the Blackhawks, making 10 tackles (7 solos) with three stops behind the line of scrimmage. He also scored on a 34-yard run and a 15-yard fumble return.

Halifax managed just 43 total yards against the Blackhawks, with 42 of those generated by the passing game. The Wildcats netted one yard rushing.

Trailing 41-0 at the break – Line Mountain won by a 48-8 count — JB finally got on the board with 3:24 gone in the fourth quarter on a 7-yard touchdown run by QB John Stoner. Jacob Frey tacked on the two-point conversion.

While Halifax (1-7, 0-5) suffered its fifth consecutive setback, one bright spot for Earl Mosley’s Wildcats was the play of linebacker Isaac Miller. Miller finished with an astonishing 22 stops – one for loss – in a 35-0 loss to Susquenita.

With at least a share of the Mid-Penn Liberty crown already tucked away, Kent Smeltz’s Upper Dauphin Trojans (6-0) will put their five-game winning streak on the line with a visit to dangerous Big Spring (3-5).

Green rushed 24 times for 171 yards and three touchdowns, while Hall picked up 98 yards and one score on 15 attempts.

Trailing 13-6 after three quarters, Upper Dauphin pulled even on Alex Hepler’s 1-yard run and Isaiah Dyer’s PAT. Then, with 4:30 to play, Tegan Engle deflected an Aaron Kanagy pass into the hands of Aiden Ritter deep in Juniata’s end.

Ritter promptly returned the pick five yards for the game-winning score. The Trojans needed a timely stop to put this thing away, however, forcing a Juniata fumble inside the UD 5 with less than a minute to play.

Konner Walker was the offensive standout for UD, rushing seven times for 128 yards and a first-half touchdown.