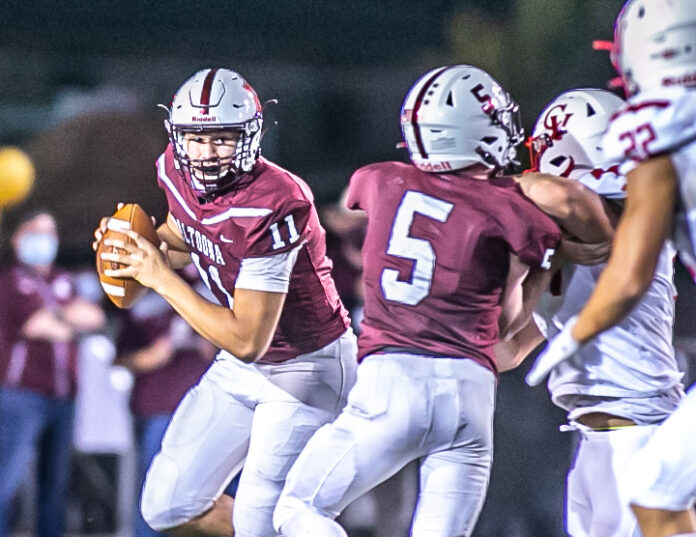 Micah Brubaker, QB, Mechanicsburg: Even without his sidekick brother, Caleb, Micah was his typical self in the Wildcats’ season-opening 28-14 win over West Perry. He was an impressive 12-of-14 for 231 yards, two scores and two picks through the air. He also added 25 rushing yards and two TDs on the ground, accounting for all four Mechanicsburg scores on the night. The ‘Cats rolled him out a ton to get him out of danger, but he was smooth much of the night with a few gorgeous deep balls to Rashawn Early-Holton (4 receptions, 151 yards, 1 TD, 1 INT on defense) and looked more comfortable compared to last year looking to throw rather than taking off too early.

Dillon Wakefield, RB, Big Spring: Wasn’t too sure what to make of the Bulldogs this year, but a 20-6 win over a James Buchanan squad that’s much improved since the last time they were in the Mid-Penn is a good way to start. Wakefield broke off the game’s first score on a 19-yard run and then iced the contest with 2:32 left when he burst through for a 24-yard TD. He finished with 101 yards on an even 20 touches, the most yards and carries of anyone on the night.

Gannon McMeans, QB, Cedar Cliff: Perhaps the Colts’ defense deserves this for their impressive two-point conversion stop to beat Berks Catholic 35-34 in double overtime, but I gotta give McMeans props for a strong first showing without Jaheim Morris at tailback to provide a massive level of protection. McMeans showed he can carry this offense, finishing 14-of-24 for 190 yards and three touchdowns (plus the tying 1-yard plunge in the first OT) in a thriller. McMeans’ scoring tosses came from 55, 15 and 10 yards out, the last a strike to Ramon Garcia in 2OT.

Brody Robinson, LB, Pine Grove: While Robinson put on a defensive show by making a school-record 21 tackles yet it wasn’t enough to prevent the Cardinals’ 16-9 setback to Schuylkill 1 playmate Jim Thorpe. What makes Robinson’s mark even more astounding was the previous single-game record (19) was set only a week earlier by Josh Leininger.

Jesse Engle, TE, Williams Valley: Engle had a splendid five-day stretch, totaling 11 receptions for 260 yards as the Vikings split road games with Mount Carmel (43-28 loss) and Nativity BVM (35-34 win). By the way, five of Engle’s receptions went for touchdowns, three against Mount Carmel and two in a come-from-behind win at Nativity.

Timmy Smith, RB-LB, Central Dauphin: Is he a No. 1 running back, a top-flight wideout or a slot receiver that creates a match-up nightmare? Mr. Smith is all of those for a Rams offense that has one of the most versatile dual-threat weapons in the state in the senior. He’s not a bad linebacker, either, if you fancy defensive impact players. Smith had only 13 touches in a 62-10 drubbing of Chambersburg, but rang up 200 total yards and found the end zone four times. So basically one out of every four times Smith touched the ball he scored. He averaged a stellar 15.4 yards per touch, and three of his four receptions went for touchdowns. Easy Week 1 choice for a Game Ball.

Joey Menke, RB, Boiling Springs: Nothing like getting the elephant of an 11-game losing streak the Bubblers lugged into this anything-but-normal 2020 season off the table right out of the gate. Well done to the lads who meld purple, yellow and white into one of the sweetest uniform and helmet combinations in Central Pennsylvania. The junior played a major role in Boiling Springs’ relatively easy victory over Susquenita by rolling up 162 yards on the ground with three touchdowns. Menke averaged 9.0 yards off his 18 carries as part of a 51-point scoring outburst. Congrats to the Bubblers.

Cam Ochs, WR, Camp Hill: Not a bad night for any high school receiver to get three catches in a game. The Lions’ junior made sure his three grabs had major impact with three touchdowns covering 135 yards to provide a major power boost to an offense that needed some juice to edge Line Mountain by a touchdown. His 24-yard grab in the first quarter gave the Lions a lead they never relinquished. He went on to haul in 45- and 65-yard TD passes that proved vital against an Eagles team that made a late push. Camp Hill was looking for weapons to complement its talented QB. Seems they found one in Ochs.

Trenten Smith, WR-CB, Cedar Cliff: It took just one offensive play for the 5-foot-10, 160-pound Smith to make his presence known during his first varsity action. Colts quarterback Gannon McMeans connected with the junior newcomer on a 55-yard dime to open the scoring in a wild 35-34 2OT thriller against Berks Catholic. Smith finished the night with 55 receiving yards, 20 more stripes on the ground and a score. He also notched five stops on defense.

Marcus Day, RB, Altoona: In what might have been the biggest upset of the first week in the Mid-Penn Conference’s opening week of action, Altoona stunned Cumberland Valley 28-14. Day played a critical role churning out 188 yards on 23 carries and a pair of TDs. He added another 75 yards on 9-of-17 passing.

Alex Erby, QB, Steel-High: Welcome to The Show, kid. The 6-3 freshman — and son of Rollers head coach Andrew Erby — posted a strong first performance as the Rollers cruised to a 43-6 victory over Upper Dauphin. Erby connected on 11-of-20 for 208 yards and four TDs, including a pair to Division 1 recruit Mehki Flowers.

Josh Leininger, QB, Pine Grove: Leininger posted up on both sides of the ball yet again in the Cardinals’ 16-9 Schuylkill 1 loss at Jim Thorpe. Offensively, the 6-1 senior completed a school-record 16 of 33 passes for a school-record 278 yards and also rushed for 79 yards and Pine Grove’s lone touchdown. He also racked up 15 tackles and an interception defensively.

Daniel Shuster, QB, Camp Hill: Flashing his clutch gene repeatedly in a 35-28 victory over Line Mountain, Shuster completed 10 of his 19 pass attempts for 263 yards and four scores — with three of his touchdown aerials landing in the hands of the aforementioned Ochs. As for the clutch aspect of Shuster’s performance, three of his TD passes came on third downs.

Jacob Feese, QB, Line Mountain: Feese flashed his dual-threat capabilities throughout Line Mountain’s season-opening 35-28 loss at Camp Hill, as the 6-1, 195-pounder nearly brought the Eagles all the way back from a 28-7 deficit. Feese displayed his legs while rushing 26 times for 138 yards and two second-half scores, but he also completed 8 of 17 passes for 102 yards.