Delayed gratification: Shippensburg charges to a 28-10 victory against Cedar Cliff 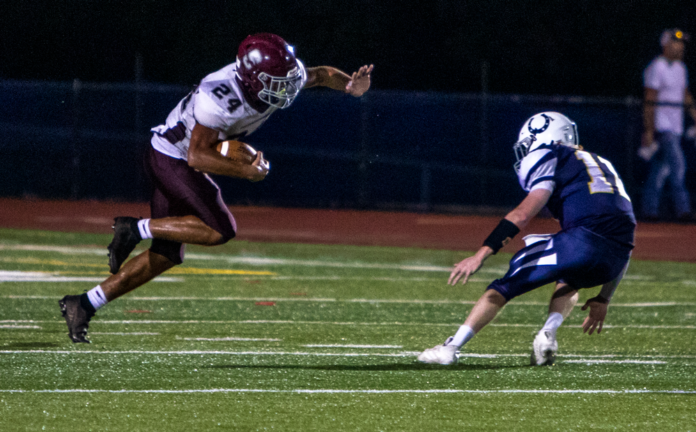 NEW CUMBERLAND—Two delays couldn’t stop Shippensburg (1-0) from redeeming its 10-7 loss to Cedar Cliff (0-1) last year in the District 3-5A quarterfinal.

And once the game got going—about an hour after its scheduled 7 p.m. start—Shippensburg didn’t waste any time executing a play they had been scheming to use against the Colts since last year.

Tucker Chamberlin pitched the ball to Trae Kater on the first play from scrimmage. Kater zipped the pitch to Erby Weller for a 51-yard completion that set the tone for the entire evening.

“We started talking about that play after we lost last year,” Shippensburg coach Eric Foust said. “We thought that was something that we could have done last year and we never got there. So that play has been in the works for about nine months. We felt we needed to start the game with a big play. Last year, we came out and do what we do which normally works for us, but to get the momentum going and get the field flipped, we thought this would be a great thing. We needed to do something special. It was exciting to see it work.”

Shippensburg stayed in control, never trailing in a game that almost didn’t happen.

That’s because a lockdown for a potential active shooter delayed the Greyhounds’ trip to Cedar Cliff. Foust was quick to credit Shippensburg’s athletic department, boosters, parents, and support staff who all played a role in getting the team prepared and to West Shore Stadium once the lockdown was lifted.

A second delay for lightning paused the action early in the fourth quarter.

Neither delay could stop the Greyhounds on a night in which Weller caught 8 passes for 159 yards and a touchdown and Kater rushed for 91 yards, a rushing TD, and an 86-yard interception which he returned to pay dirt.