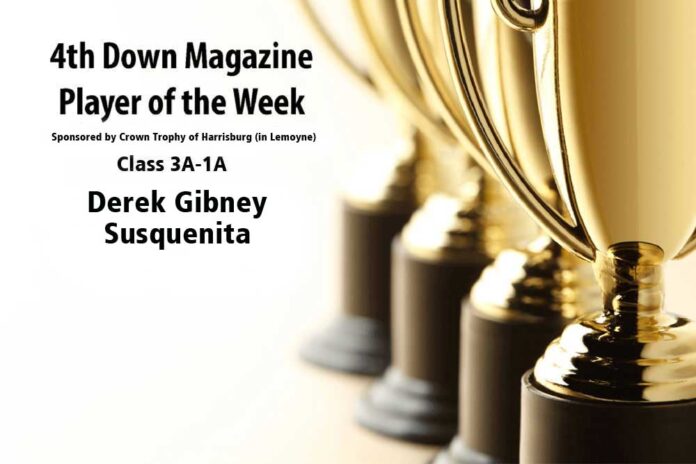 It was a busy Friday night for the young Susquenita quarterback.

Derek Gibney scored four touchdowns — two rushing and two passing — and ran in and threw for two two-point conversions as well. If he was on your fantasy team this weekend, you probably won.

Gibney’s monster performance for the Blackhawks turned away Camp Hill in a Friday shootout 39-34 and convinced the ‘Nita faithful to vote in droves. The sophomore won this week’s Small School Player of the Week, snagging a whopping 1,909 votes. And in keeping with the weekend’s shootout, he won in a barnburner at the polls as well, edging Upper Dauphin running back Brady Morgan’s 1,759 tallies.

Gibney is just a sophomore running first-year coach Augie Glass’s offense for the 2-0 Blackhawks. He was 10-of-22 for 163 yards through the air and added another 108 stripes on 11 carries. His TD tosses covered 10 and 27 yards, while the TD trots went for 1 and 36 yards.

It was an impressive improvement for Gibney, who the week before in ‘Nita’s season opener — delayed 10 days due to a COVID-19 issue — when he was 5-of-27 for 55 yards, a touchdown and an interception while rushing for just 8 yards on five carries.

There were 4,996 votes cast in the small-school poll this week. Gibney tracked down 38% of those. He and the unbeaten Blackhawks face 2-1 Big Spring on Friday.