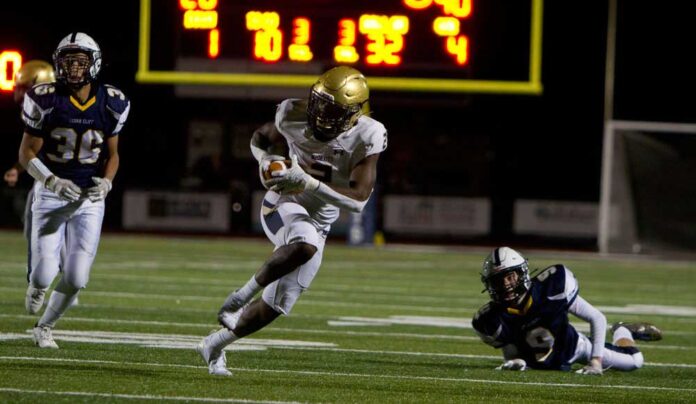 OUTLOOK: There is no rebuilding at McDevitt, just reloading. The Crusaders return a wealth of starters, so many that we ran out of space to talk about the team’s monstrous presence in the trenches, a defensive unit that is stocked to smother the run and pass alike, and a pair of senior all-star caliber receivers in Kamil Foster and Mario Easterly, who combined for 14 TDs and nearly 1,000 yards last season. Even with a freshman quarterback, we see no reason to believe that McDevitt can’t conquer the Keystone, if not District 3 itself.

3 THINGS TO KNOW
1. In the past
It’s going to take a few years for fans, and perhaps a few former players, to completely move past what happened to Bishop McDevitt last season. If you’re looking for a refresher, the Crusaders stomped through their schedule for a 6-0 record, but missed out on a spot in the District 3 Class 4A postseason when the size of the bracket was trimmed over COVID-19 concerns. Bishop McDevitt’s streak of 16 consecutive playoff appearances is over. But if you ask Crusaders coach Jeff Weachter or any of his current players, last season is ancient history. Of course there’s no reason to dwell on the previous year when McDevitt is returning a wealth of starters on both sides of the ball for this season. “It was tough not making the playoffs, and I think that motivated our guys in the offseason, but now we’re talking about this year,” Weachter said. “We’re bringing back nine starters on each side of the ball. You just kind of move on and start thinking about the next year.”

2. Freshman at the helm
With all of the talent returning for Bishop McDevitt, the one position where the Crusaders need to start over is at quarterback. Graduated is Lek Powell, who unloaded for nearly 1,600 yards in six games with a spotless 20-0 touchdown to interception ratio. McDevitt will now place its trust in a freshman: Stone Saunders. Ninth-grade starters make any coach nervous, but Weachter says the 6-foot-1, 185-pound Saunders is the team’s best option at QB. The University of Michigan agrees. Saunders was so impressive in his summer trip to Michigan football camp that the Wolverines felt compelled to offer him before he even makes his first high school pass attempt. “There’s lots of ability, he’s very intelligent and has a lot of football smarts. I think he’ll be fine,” Weachter said. “He understands coverages and gets the ball out pretty quick. He’s a freshman, so he’ll make some mistakes, but he’ll also be making a lot of plays.” Saunders will be backed up by sophomore Nevan Hopkins, who measures up at 5-foot-10 and 150 pounds.

3. Not one, not two, not three…
But four running backs look to share carries for McDevitt this season. The most recognizable name among the bunch is junior Marquese Williams, although his stats (53 carries, 248 yards, 3 TDs) took a bit of a dip last fall due to playing only three games in an injury shortened season. Weachter says he expects to see Williams return to form from his breakout freshman season in 2019, where he totaled more than 1,000 yards on the ground to go along with 15 touchdowns. “Marquese looks really, really good,” Weachter said. “His speed is back and so is his cutting ability. His ankle is 100 percent now.” Don’t be surprised to see Williams split out and play a little bit of wide receiver in the slot, which would create room in the backfield for sophomores Rico Scott and Ty Kephart, as well as junior Cyncir Bowers, who all averaged more than 5 yards a tote last season.