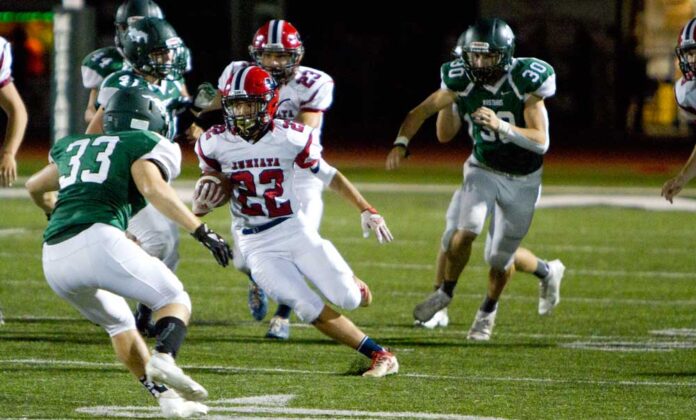 Juniata defense will get tested … again

Fresh off a splendid defensive performance that enabled Juniata to claim the District 6/8/9 regional championship and land in the PIAA’s Class 4A playoff bracket, Kurt Condo’s Indians (10-2) will be challenged by a Meadville squad (8-3) that loves to run the football. And when we say loves to run the football, the Bulldogs (8-3) have thrown just 31 passes all season long. However, that run-first, run-all-the-time credo didn’t prevent the northwestern Pennsylvania squad from claiming a District 10 championship.

Leading just 16-13 last weekend at the break, Meadville erupted by scoring 30 points in the third quarter and pulling away to a decisive 52-19 victory over General McLane. Khalon Simmons piled up 226 yards on 18 attempts and scored four times (coverage yardage of 70, 2, 7, 25), while Griffin Buzzell tacked on 110 rushing yards and three TDs on just 14 carries.

And those numbers are hardly newsy to anyone that’s followed Meadville all season as Simmons has gained 1,630 yards and scored 27 times on just 140 totes, while Buzzell has banked 1,278 yards and 18 touchdowns on 138 touches. Brady Walker was the third wheel in the Bulldogs backfield, rushing 98 times for 810 yards and 15 TDs, but he has not carried the ball since Oct. 22. For those keeping track, Meadville has rushed 459 times for 4,168 yards and 64 touchdowns in its 11 outings thus far.

When Meadville does put it up, QB Gavin Longstreth’s 12 completions have gone to Simmons (8 for 139 yards) and Buzzell (4-71). The latter just happens to be the lone senior on an incredibly young side and has fueled Meadville’s defensive effort as well, with the 6-foot-1, 205-pounder totaling 17 tackles (2 for losses) from his middle linebacker spot.

Junior defensive end Rhoan Woodrow added 12 stops, two tackles for loss and one quarterback sack for the Bulldogs. Juniata claimed its eighth straight victory last weekend, stopping Pittsburgh entry USO 8-0 in overtime at Altoona’s Mansion Park. While the Indians flashed balance in the ground game as Zachary Harr, Seth Laub and QB Jacob Condo combined for 165 rushing yards — Laub scored on an 11-yard run and Condo tacked on the 2-pointer — possessing the football and milking clock may be one approach against the big-play Bulldogs.

Or, as they have for much of the season, Kurt Condo’s bunch could rely on the Juniata defense. Last weekend, the Indians stopped USO four times inside the 20, including bringing down opposing QB Keon Smalls at the 2 on fourth down in OT. Juniata also registered seven sacks from seven different players. Juniata’s shutout was its fifth of the season, and the Indians’ front-line D has not allowed a single point since Oct. 1.

What will add to the degree of difficulty Saturday is the Indians will be playing at Meadville — and that means a lengthy bus ride leading up to an all-or-nothing game. Should Juniata prevail, the Indians will meet either Allentown Central Catholic or unbeaten and top-ranked Jersey Shore in next weekend’s state quarterfinals.